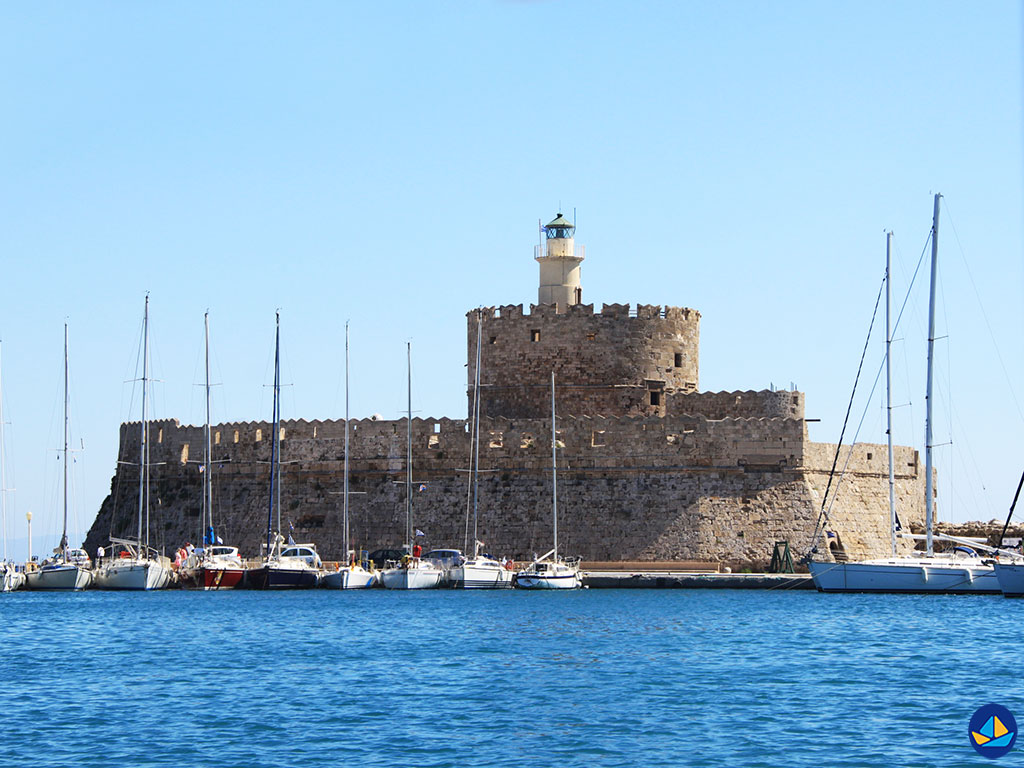 Built on top of the fortess of St. Nicolaos in Mandraki Harbor on the island of Rhodos, the lighthouse stands watch on the eastern breakwater, very near one of the footprints of the ancient Colossus of Rhodes. The fortress was build about 1460 crusaders called the "Knights of Rhodes" , who feared Ottoman invasion.The lighthouse also goes by the name Rodos Light and included in the Greek lighthouses network in 1947 with the annexation of Dodekanisa.

The lighthouse was constructed by the French in 1863 on the top of St. Elmo tower on the fortress enclosing Mandraki Harbor. Its flashing fourth-order white light was visible 14 miles (23 kilometers). The lower portion of the tower suffered damage and deterioration over the years and was for a time replaced by a skeleton beacon on which the original lantern was dispayed. The masonry tower was rebuild in 2007 and the lantern was restored and relighted with a 300mm optic manufactured by Tideland. Its range is 11 miles (18 kilometers).

The lighthouse is accessible across the street from the fortress on a stone pier beyond the windmills. It is not open to the public. Today, expensive yachts tie up at Mandraki Marina. Cruise ships and ferries, as well as large cargo vessels and tankers, call at the manmade pier about 2297 feet (700 meters) southeast of the lighthouse . In fact Rhodes has three distinct harbors. Mandraki, Limani and Akantia. After Piraeus and Patra , Rhodes is Greece's busiest port.