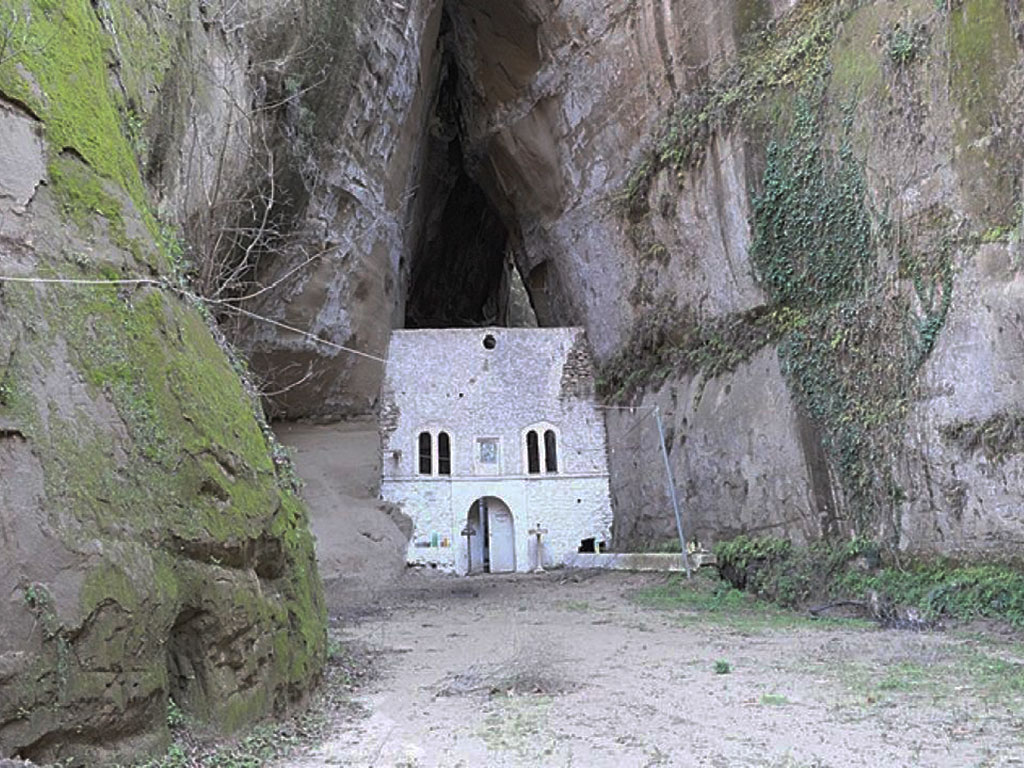 The cavernous Monastery of the Ascetic is dedicated to the deposit of the Holy Belt of the Virgin. It lies between two rocks, in the green ravine of Goumeros, in the Peloponnese. The Holy Monastery is a monument, probably of Byzantine origin, situated in a remote but beautiful landscape. It is among the most impressive monasteries in whole Greece, named after an ascetic monk who lived there. According to a legend, local hunters while passing by the area, saw the monk but they took him for a wild boar, shot him and mortally wounded him. The hunters ended up in the spot where there is the gap between the two rocks. They found there the icon of the Virgin holding an infant in her hands. So, they decided to build a small monastery in that place.
The cave is divided into two parts. In the first part is the sanctuary of the Monastery, a kind of corridor and a well. It is believed that water gushed out from the place where the body of the monk fell after the shot. That was the reason of buildind the well. In the second part are the ruins of the Byzantine monastery, which dates back to around 1200 AD. The monastery lies in a cavity covering 300 sq.m.
In this area was the Oracle of the Athletes. The way to the monastery was the ancient cobbled path, part of the sacred road Ilida - Olympia, through which the athletes taking part in the ancient Olympic Games were passing. In the ravine, there are some of the oldest olive trees of Greece, the branches of which were used to crown the winners of the Olympic games, held in the nearby stadium of Olympia. To get to the Monastery, you have to follow the mountain road Patra - Tripoli that will lead you to the village of Goumero and then hike part of the gorge.
For several years the monastery housed more than 50 monks but it has been abandoned for the last half century. Since 2001 the site is considered a Monument of Natural Beauty by UNESCO.