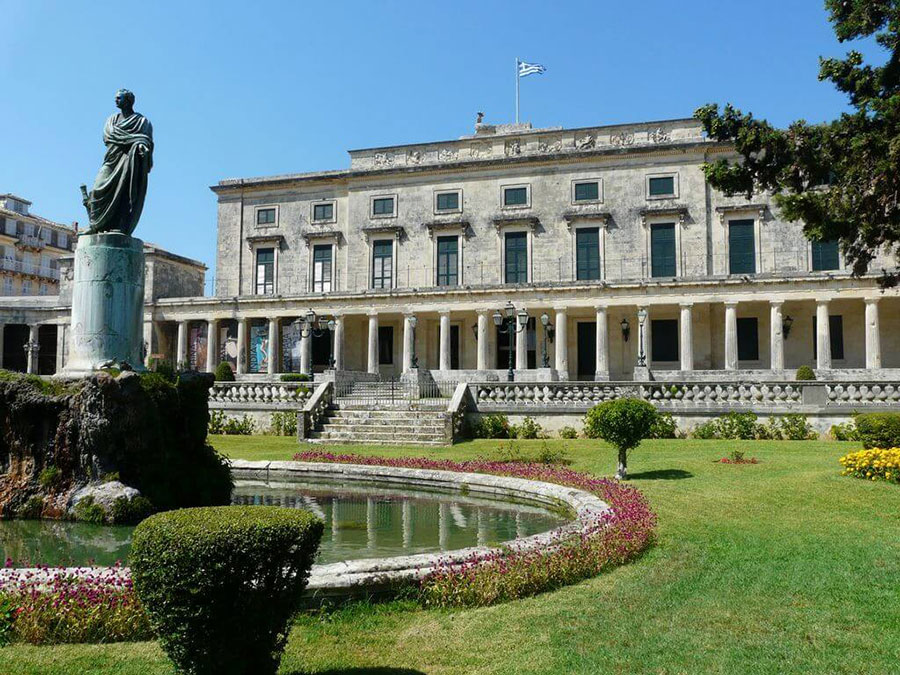 Museum of Asian Art of Corfu

The Museum was founded in 1927, when the ambassador Gregory Manos donated his collection comprised of some 10,500 works of art, and operated until about 1974 as Sino-Japanese museum. Later the museum was enriched with other collections mainly from mid-Asia and since then operates as Museum of Asian Art. The museum often hosts periodic exhibitions. In its fifteen rooms the collection of G. Manos (10,500 items) is exhibited, as well as the collections of N. Hadjivassiliou (450 items), Ch. Hiotakis (395 items), the exhibits from the Municipality of Corfu (93 items), and the donations of Petros Almanachos, Iordanes Siniosoglou, Ioannis Kollas and that of the National Archaeological Museum. The Museum is housed in the Palace of Saint Michael and Saint George, which was built between 1819 and 1824, on plans designed by the architect and colonel of the corps of Royal Engineers Sir George Whitmore. It is a Neo-classical building, of the British Kidlston and Syon House rhythm, and served as the residence of the British High Commissioners, as the headquarters of the High Commission and of the Ionian Senate (government) until the Union with Greece, as the seat of the Ionian Parliament, temporarily, and as a treasury and the headquarters of the Chivalric Order of Saint Michael and Saint George (established in 1818), to which the building owes its name. After the Union (1864) the British offered the Palace to the Greek State and from then on until 1967 the Palace was used as the summer residence for the members of the Greek royal family and for some years housed the archaeological collection of Corfu. On the ground floor of the Museum the hall of the Ionian Senate can be visited and old furniture, the portraits of the presidents of the Senate and other items have been preserved. On the second floor there is the impressive throne-room, the round ballroom and the dining room where the medals of the Chivalric order are painted on the walls. Several valuable paintings decorate the walls and on the rest of the rooms the Asiatic collection is exhibited. These works of art include items from China (Chang, Tcheou, Han, Wei, T'ang, Sung, Ming and Ch'ing dynasties), Japan (Samurai suit of armor and weapons, No theater masks, etc) as well as exhibits from India, Pakistan, Korea, Siam, Tibet, Nepal, Cambodia and Thailand. Of Particular interest is the unique Greek-Buddhistic collection of sculptures from Gadara, Pakistan, dating from the 1st-5th centuries A.D., and bearing evidence of Greek influences owing to the presence of Alexander the Great in the region.