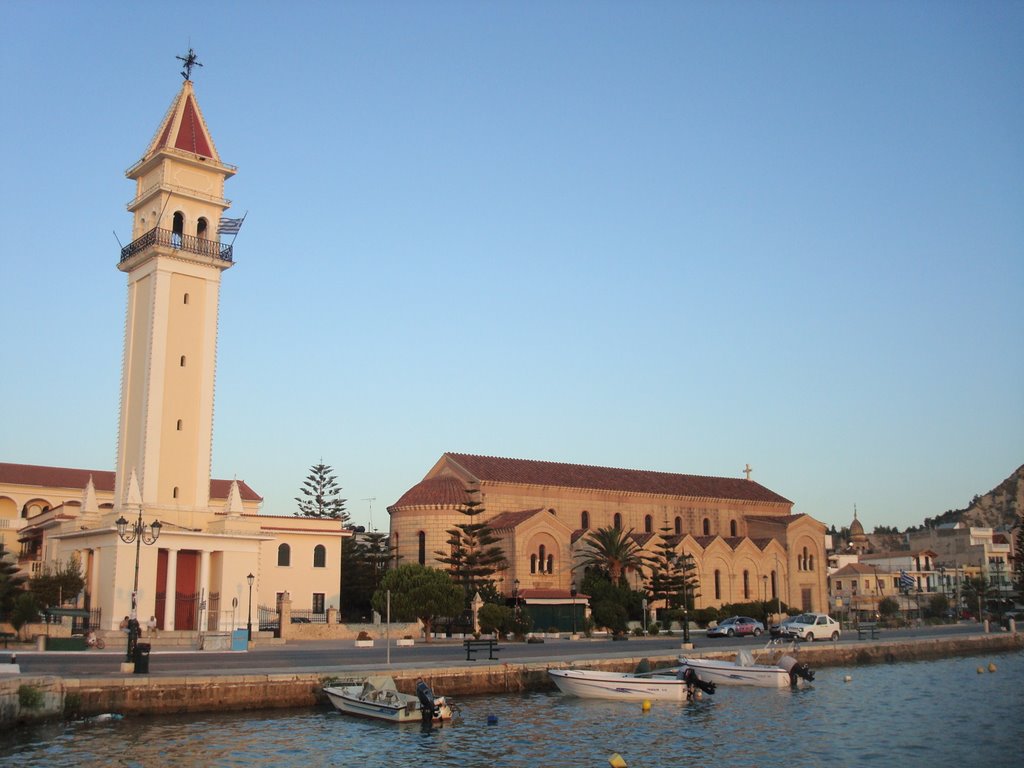 At a prominent place at the port of Zakynthos, at the district of Ammos, is the majestic church of the patron saint Agios Dionysios, the centre of the island’s religious life, together with the complex of the Monastery of Strofades, which was transferred here in 1717 from the islands with the same name.
The church was founded in 1708 and was completed in 1764. It was destroyed in 1893, by the great earthquake that devastated the island and was reconstructed after the initiative of a special committee that was established in 1900. It was founded in 1925 and its construction begun in 1931, according to the plans of the architect Anastasios Orlandos. It was inaugurated in 1948 and thanks to its anti-seismic construction it survived the earthquake of 1953. The majestic bell tower, approximately 40 meters high, was erected later, while in 2000 the new wing of the nearby monastery was inaugurated, which included modern facilities, the museum-sacristy and a workshop for the conservation of icons. The church is a large three-aisled basilica with elevated the central aisle, which is supported by fourteen marble pillars with Corinthian capitals.
Its interior is decorated with important works of art. Its most important treasures are the silver reliquary where the sacred relic of the saint is kept, and the icons of the silver coated screen, all works of 1829 by George Diamantis Bafas , silversmith from Epirus. The reliquary is inside the so-called “room of the saint”, with the wooden-carved, gold plated coating. The gold-plated, wooden carved screen and the wall paintings with scenes from the life of the saint, made by famous artists and wood-carvers, while one of the most famous works of art of the church is the famous painting with the procession of Agios Dionysios, work of 1766 by the priest Nikolaos Koutouzis.
At the museum of the monastery they keep works of art, sacred relics, manuscripts and rare editions that come from the monastery that was on the islands. The church celebrates on the 24th of August (in memory of the translation of the saints’ relics) and on the 17th of December (day he died).
The Life of Agios Dionysios
Our father among the saints Dionysius of Zakynthos was born in 1547 on the island of Zakynthos in the Ionian Sea. Before becoming a monk his name was Draganigos Sigouros. He was educated by priests and became fluent in Greek, Italian, and Latin. He excelled in theology, became a monk in 1568, received his first degree of ordination as a priest in 1570 as Daniel; he later became hieromonk of Zakynthos and Strofades.
In 1577 he was raised to Archbishop of Aegina and Poros and after a year abdicated from this dignity and settled in Zakynthos as an abbot of a monastery. In December 17, 1622 he fell asleep in the Lord. He had asked to be buried in this monastery and his grave is still to be found in the chapel of St George; a dependent of the monastery.
It has been found that his body remains intact and emits a mixed fragrance of flowers and frankincense. Therefore he is venerated, and his sainthood has been proclaimed by the Patriarch of Constantinople. His feast day is celebrated on December 17, and on August 24, the Church celebrates the transfer of his holy relics.
St. Dionysius was remarkable in his forgiveness and love for his fellow man. A man came to St. Dionysius's cell and begged the saint to hide him from his pursuers. When St. Dionysius asked him why he was being pursued, the man told him that he had killed a man. The murderer did not know that he had killed the saint's own beloved brother Constantine.
St. Dionysius was very grieved but hid the man and did not surrender him to the law. Instead he instructed him and brought him to repentance. According to local tradition, the murderer later repented and became a monk himself at that same monastery. St. Dionysius is an example to us all for his forgiveness of even the most grievous sins against us.
Dionysios grants his people many blessings; and many miracles are reported in connection with his ministry. For example, when the Greek Orthodox Church of St. Nicholas was destroyed on September 11, 2001, during the World Trade Center attack, only two things were recovered intact: a cross and a paper icon of Dionysios.
Dionysius rests in the church which bears his name in Zakynthos, where opening his tomb is often found impossible. It appears as though this occurs when Dionysius is out performing miracles. Afterwards, when the tomb can be opened, seaweed is found at his feet and his slippers are found to be worn thin. In fact, his slippers need continual replacement because they receive so much wear. He is often seen alive and walking.
The other "Walking Saints" of the Ionian Islands are St. Spyridon of Trimythous the Wonderworker from Corfu and St. Gerasimos from Cephalonia. 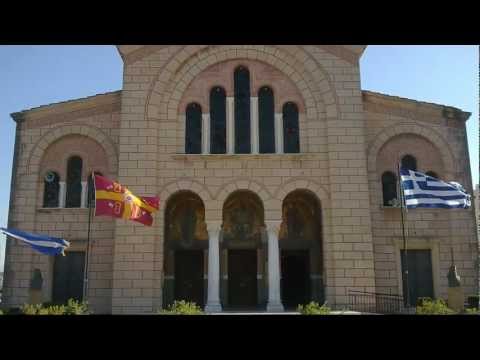