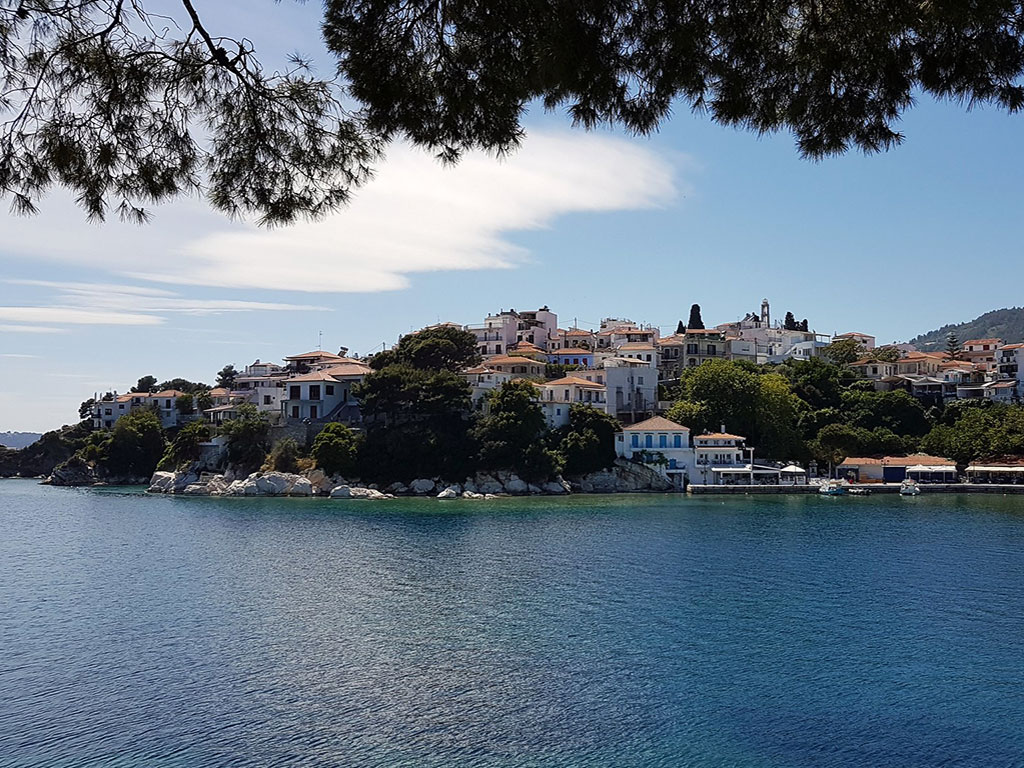 Skiathos Town is the capital and is the only real town on the island of Skiathos. It is a charming Aegean spot, on the southeast side of the island, characterized by narrow cobbled alleyways and gorgeous two-storey houses with tiled roofs, built amphitheatrically on two hills. It is a relatively new settlement, constructed in 1829 - 1830 on the site of the ancient city. Till the end of the Greek Revolution, the population lived in the old city of Skiathos, today called "Kastro" dating back to 800 AD.

Entering the port of Skiathos, you are welcomed by Bourtzi, a tiny pine-covered peninsula that divides the port into two separate parts. To the right is the new port and to the left, the old port of Skiathos Town, a very pleasant place for a morning or evening stroll.  Bourtzi hosts the ruins of a 13th-century Venetian fortress, now housing the Nautical Museum. The Papadiamantis house-museum, the place where the famous Greek writer, grew up and spent his final years lies in the center of the town. Even if you are not familiar with his work, it is worth visiting it as it depicts a traditional Sporades home of the 19th century. In his 1860 house you may find books, paintings and photographs that will allow you to find out more about the writer's life and work. The main street is also dedicated to Papadiamantis who is considered the father of modern Greek literature. Here you can find a plethora of dining and entertainment choices as well as many touristic stores.

Skiathos Town is full of places that tell its story. Such places are the two historical churches, the Church of Panagia Limnia, built in 1837 and the Metropolitan Church of The Three Hierarchs. The bell tower of Panagia Limnia stands out among the city's buildings and is also the place where the skull of Alexandros Papadiamantis is preserved as well as the miraculous icon of Panagia Odigitria (1700), brought to Skiathos by the inhabitants of Limni, Evia who moved to the island and settled in the area. The icon of Panagia Eikonistria, patron saint of Skiathos is kept in the church of The Three Hierarchs. The church of Agios Nikolaos is perched on a hilltop high above the Town skyline. It is visible from all corners of the town and is one of the first things you see when the boat enters the harbor. From the large terrace in front of the church, you can enjoy an incredible panoramic view across the entire town. A great place for capturing some really incredible photos is the Skiathos airport, a unique place worldwide where you can stand beneath planes as they are coming in to land.

Skiathos Town is the heart of the whole island as it the place where all public services are located and all the economical, commercial and cultural life takes place. The capital town of Skiathos is a throbbing, picturesque settlement with excellent facilities and a vibrant nightlife that attracts thousands of holidaymakers and celebs every year.