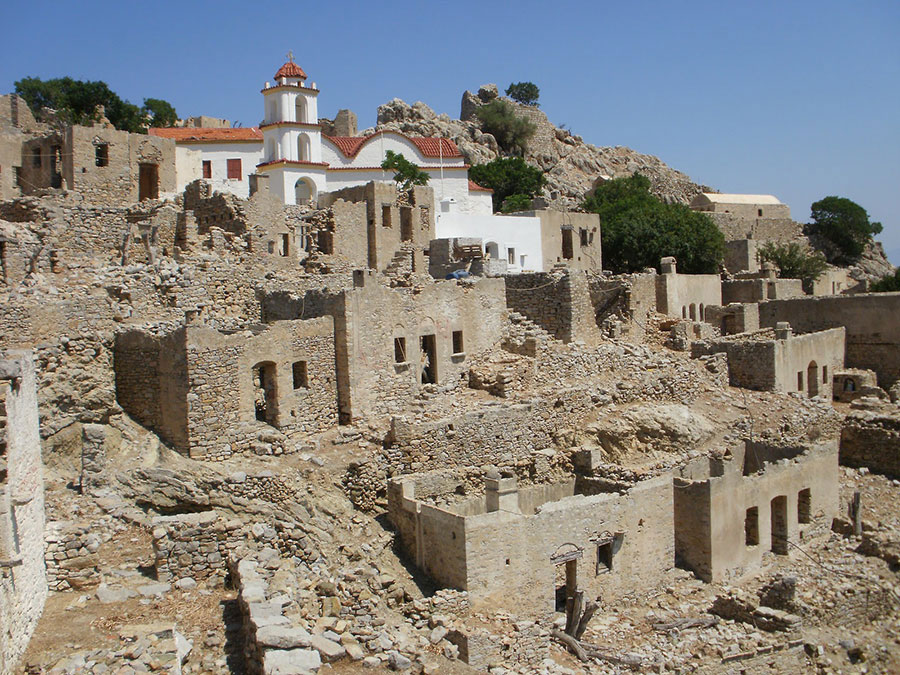 A ghost-village is located alongside the main road which connects Megalo Horio to Livadia, just before the latter. It has been totally abandoned for years now, with the sole exception of a bar which attracts a lot of people at night, especially youth. During the prewar times, Mikro Horio was not small at all as it had over 750 permanent residents. They were gradually reduced by the migration to Rhodes, Athens, Australia and America and the fact that those who were left behind started moving to Livadia. Out of the 220 houses of the village the walls are preserved but not the roofs and the frames since the resettlers took them along in order to use them again. On the hill’s peak there are the ruins of a medieval tower (it has been declared as listed monument according to the 17/24-12-1948) and if you go up there you will admire the village planning from above. The amphitheatrical formation of the single-room residents and the road network shows that it was organized in a single residential complex most probably by the Knights of Saint John in the 15th century. Below the abandoned watchtower in a much better condition, i.e. covered, white-washed and operated, the arched church of Agia Zoni is preserved, built in 1861 with an elegant bell tower. In addition, the cemetery church of the Assumption of Virgin Mary is preserved, whose walls were painted in 1787 by the hagiographer Neofytos of Symi (it has been declared as listed monument according to the 17/24-12-1948). The hagiographies of Agios Ioannis in Avalas present great interest. Pay attention to the scaly thorax of Agios Dimitrios, like that of the knights, and the unusual pattern of the representation of Paradise in its western wall. In the recent years, a residential complex was restored in the uninhabited village. There is another abandoned village in the SE part of the island. It was called Gera and it is approximately 3 km away from Livadia. Here the residents of Mikro Horio had their agricultural veterinarian premises, exploiting the fertility of the surrounding cultivated areas and the abundant water of the nearby spring of Despotis.