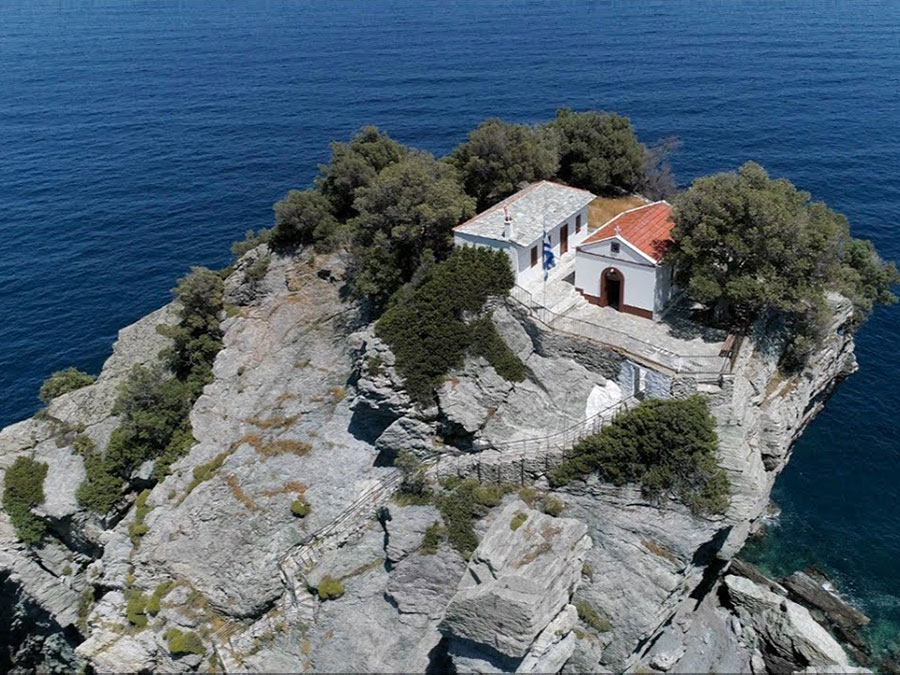 Just before you reach Glossa, you meet on your right hand a road leading to the chapel of Agios Ioannis in Kastri. The chapel of Agios Ioannis is at the top of a rock about 100 meters high, and to reach one must climb about 106 steps carved on the rock. Before the road reaches the sea, there is a tap of water in the Virgin Mary's chapel. The visitor rises from a well-protected staircase carved into stone. From the top the view to the sea is magnificent. The small, lonely beaches with the blue-green waters between the gray rocks add one more note of beauty to the area.

Tradition says that a fisherman from Glossa, as he returned one night, from fishing saw a light at the top of the rock. He watched it every night until a woman who revealed to him at the top of the rock showed a picture. When he climbed to the top, he found the icon of St. John the Baptist. She took the picture, however, wherever she was carrying it, she was back to her original position, where her chapel was finally built, celebrating August 29th.

Scenes on the rock (the chapel of the wedding is St. John) were taken from the very successful Hollywood and Universal Studios movies with the wonderful ABBA songs and the loved and amazing actors Mamma Mia! The shootings took place in August and September 2007 (shootings lasted 7 days with preparations lasting more than 3 months).

Church of the birth of Christ of Skopelos

Church of Panagitsa of Pyrgos