Situated 19 km southwest of Chios Town, Vouno is a typical example of a medieval village. The village is built like a castle with the outer walls of the houses forming the castle’s external wall. Vouno took its name from the rock on which it is built (vouno is the Greek word for mountain) and thanks to this mountain the village survived the big earthquake of 1881 which caused severe damages to other villages on the island. Vouno has retained its original architecture form with arched passages and narrow alleys that resemble to a labyrinth. According to travelers of the past centuries, once the village had almost 500 residents, a fortified tower and several old churches as well as two gates for the residents to enter and leave the settlement which were open during the day and closed at night. Today, the village has only 170 residents mainly engaged in cultivation. This little village offers lots of photo opportunities and a visit can be combined with swimming at one of the extraordinary beaches in this area. 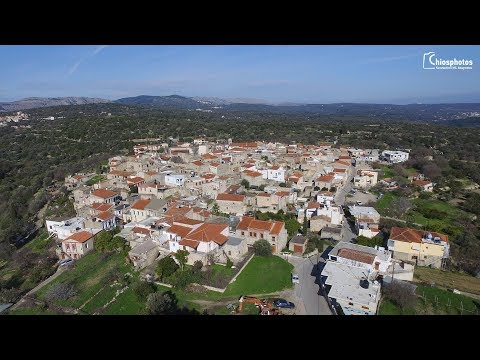