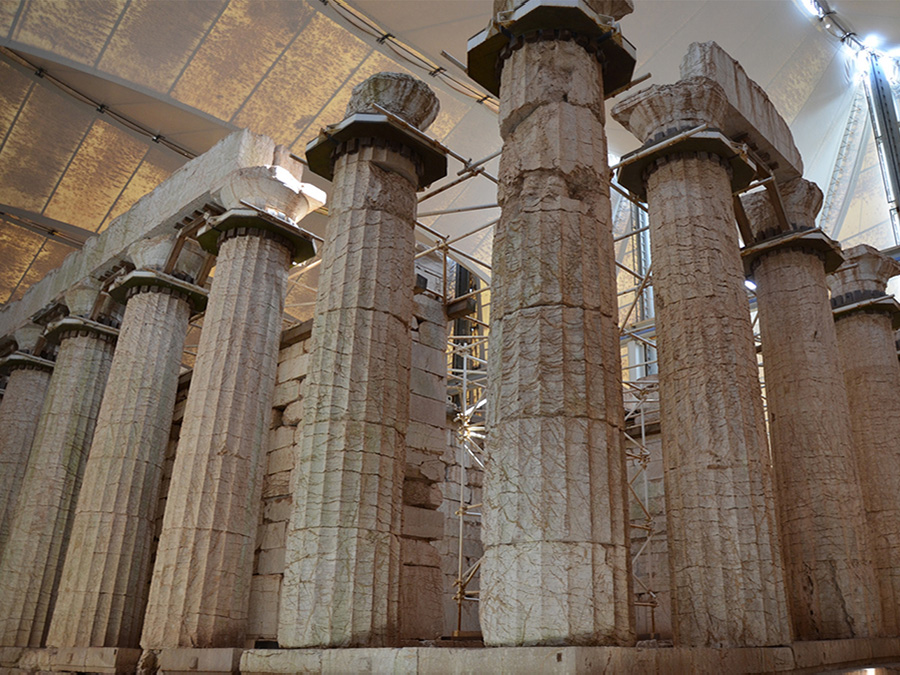 Temple of Apollo Epicurius at Bassae

The temple of Apollo Epikourios, one of the most important and most imposing temples of antiquity, stands in the bare and rocky landscape of Bassae. It is unique in the history of ancient Greek architecture because it combines a variety of novel ideas both in its external appearance and in its internal arrangements. Indeed, Pausanias considered it to be among the finest temples of the Peloponnese in terms of sheer beauty and harmony, second only to that of Tegea (8, 41, 8). The building is dated to 420-400 BC and is believed to be the work of Iktinos, who succeeded in combining masterfully several Archaic features imposed by the conservative tradition of the Arcadians with the characteristics of the new Classical style. The surviving temple is not the first one to have been constructed on the site. The earliest temple of Apollo erected in the late seventh century BC, possibly at the same location, was rebuilt at least twice in approximately 600 and 500 BC. Many architectural features from these two phases survive, including a large terracotta acroterion with ornate painted decoration, roof-tiles and antefixes.

The Classical temple was raised on bedrock, on a specially built terrace. Like several other temples in Arcadia, it is orientated east-west instead of the usual north-south, possibly because of local tradition. The building is of local grey limestone, with parts of the roof, the capitals of the cella and the sculptural decoration being of marble. This is the only known temple of antiquity to combine three architectural orders. It is Doric, peripteral, distyle in antis, with pronaos, cella, adyton and opisthodomos. The temple has six columns on the short sides and fifteen on the long sides, instead of the period's usual ratio of 6:13, which gave it the characteristic elongated shape of Archaic temples. Inside the cella, on either side was a series of five Ionic half-columns engaged in buttresses, which projected from the sidewalls dividing the space into niches. The last pair of half-columns divided the cella diagonally, not at right angles like the others. Between them stood a single column. Its capital, recorded in the drawings of the first modern travellers, is the earliest known example of a Corinthian capital in the history of Greek architecture (fragments of the capital are now in the National Archaeological Museum). According to one theory this column was in fact an aniconic representation of the deity in accordance with the earliest Arcadian traditions, while another theory suggests that the fifth pair of half-columns, which stood on either side of this one, was also Corinthian. The cult statue of Apollo was inside the adyton, which was located behind the Corinthian column. A door on the east wall led to the pteron, on the outside. The two-sloped roof had marble tiles of Corinthian type.

A Doric frieze of undecorated metopes and triglyphs ran along the outer facades. Only the inner metopes of the short sides were decorated: those on the pronaos had depictions of Apollo's return to Olympus and those on the opisthodomos contained the rapture of the daughters of the Messenian king Leukippos by the Dioskouroi. The pediments may have been undecorated. The temple's main decorative feature was the marble Ionic frieze supported by the Ionic half-columns of the cella. This frieze was thirty-one metres long and consisted of twenty-three marble slabs, of which twelve depicted battles between Greeks and Amazons and the remaining eleven showed battles between Lapiths and Centaurs. The frieze was unearthed by foreign antiquaries in 1812 and sold to the British Museum in 1815. It may have been the work of Paionios, who also executed the celebrated statue of Nike at Olympia.

The temple remained in use into the Hellenistic and Roman periods, its roof being repaired several times. After the building was abandoned, the decaying roof caved in causing extensive damage, further aggravated by human intervention with the removal of the metal clasps used in its construction. The temple, identified in 1765 by French architect J. Bocher, was first explored by a group of antiquaries in 1812. In 1902-6, the Greek Archaeological Society excavated and restored parts of the temple. In 1975 the newly founded Committee for the Conservation of the Temple of Apollo Epikourios launched a program for the monument's conservation and restoration. The Committee was reformed in 1982 and the Ministry of Culture has been overseeing the difficult task of restoring the monument ever since. A shelter, which will be removed at the end of the works, was erected in 1987 to protect the temple against the region's extreme weather conditions.

The territory of Bassae is located between Arcadia, Triphylia and Messenia, on the western slopes of Mt. Kotilion near the ancient city of Phigaleia. The mountain is scored with ravines (vassai), which give the place its name. In this bare, rocky landscape, 1131 metres above sea level, the people of Phigaleia founded a sanctuary in honour of Apollo. A sacred road connected the sanctuary with the city, nearly thirteen kilometres away. The sanctuary was dominated by one of the most imposing monuments of ancient Greece: the temple of Apollo Epikourios, whose cult was established in the late eighth-early seventh century BC. The god was given the surname 'epikourios', either because he was thought to have helped the Phigaleians in their struggle against Sparta in 659 BC, or because he prevented the plague from spreading during the Peloponnesian War. Apollo is also named 'vassitas' in an inscription from this site.

The history of the sanctuary at Bassae is linked to the military activities of Phigaleia and to the continuous struggle between Arcadians and Spartans. The former always sided with Messenia in its wars against Sparta. The site was occupied first in the Archaic period. The earliest temple of the sanctuary was built in the late seventh century BC and a small settlement grew up around it. It is possible that many Messenians found refuge in Bassae after fleeing their homeland following the Spartan victory of 650 BC. Many votive offerings from this period were found in the topsoil around the temple. They include terracotta vases and figurines, metal figurines of humans and animals, jewellery, the tortoise-shell sound box of a lyre and many weapons, both real (made of iron) and votive (made of bronze). The offering of weapons may indicate that in the sanctuary's early years Apollo was worshiped primarily as a war god. Traces of metalworking from the Archaic period were also discovered near the temple. Although the temple's pre-Classical building history is uncertain, it is probable that the Archaic temple was reconstructed at least once or twice between 600 and 500 BC. Several architectural pieces belonging to these phases were uncovered on the site. The surviving Classical temple by Iktinos was built in approximately 420 BC. The ancient quarries that provided the building material for the temple were located to the north and northwest of the site.

Artemis and Aphrodite were also worshiped in this area, in a separate sanctuary on the highest peak of Mt. Kotilion. Demetra, too, was worshiped here, although her sanctuary has not yet been identified. The sanctuary at the top of Mt. Kotilion was probably founded by poor Phigaleians living in Bassae. Its temples were abandoned in the third century BC, unlike the sanctuary of Apollo, which remained in use in the Hellenistic and Roman periods, as shown by the stamped tiles used for repairing the temple roof. Pausanias visited the sanctuary in the second century AD and described the monuments and their history (8, 41, 7-10), particularly that of the temple of Apollo. In subsequent centuries the sanctuary was abandoned and severely damaged by earthquakes.

Remote and difficult to approach, the site remained forgotten until it was identified by French architect J. Bocher in the eighteenth century. Since then several travellers visited Bassae. The site was explored in 1812 with the permission of Veli Pasha, the Turkish commander of the Peloponnese, by a group of foreign antiquaries who removed twenty-three slabs from the Ionic cella frieze and transported them to Zante along with other sculptures. Veli Pasha's claims on the finds were silenced in exchange for a small bribe and the frieze was bought at auction by the British Museum in 1815. British intellectual C. Muller characterized this as an act of vandalism, similar to those of Lord Elgin. However, detailed drawings made during this first excavation campaign provide useful information on the monument's condition then. Subsequently, several archaeologists investigated and studied the sanctuary's monuments. Systematic research by the Greek Archaeological Society began in 1902, under the supervision by K. Kourouniotis and with the collaboration of K. Romaios and P. Kavvadias. More fragments of the Ionic frieze, now in the National Archaeological Museum, were uncovered during this period. Research by both the Archaeological Society and the Greek Archaeological Service continued until 1979. Conservation and restoration of the temple of Apollo Epikourios has been conducted since 1965 and more systematically since 1982 by the Committee for the Conservation of the Temple of Apollo Epikourios of the Greek Ministry of Culture. 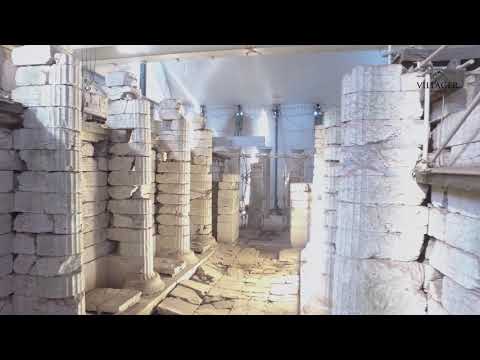