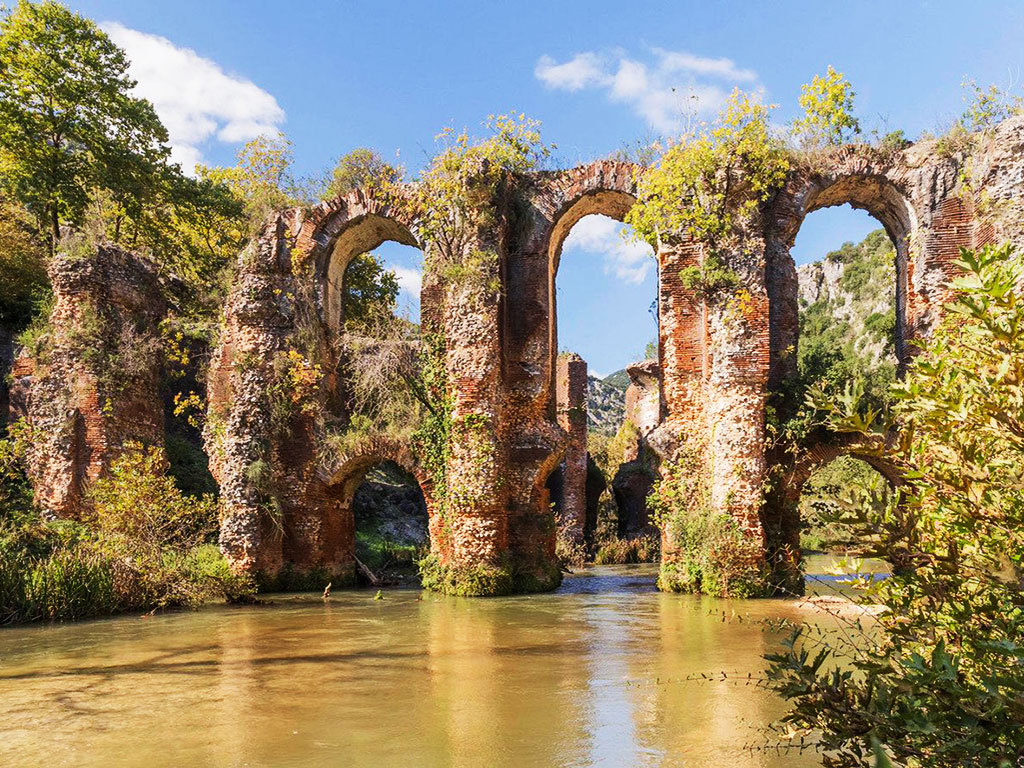 Nicopolis or Actia Nicopolis was the capital city of the Roman province of Epirus Vetus. It was located in the western part of the modern state of Greece. The city was founded in 29 BC by Caesar Augustus in commemoration of his victory in 31 BC over Antony and Cleopatra at the Battle of Actium nearby. It was soon made the major city of the wider region of Epirus region. Many impressive ruins of the ancient city may be visited today.
In 28 BC, 3 years after his victory in the naval battle of Actium, Octavian founded a new city which he called Nicopolis (the City of Victory), located on the southernmost promontory of Epirus, and across the mouth of the harbour from the ancient town of Actium. This foundation echoed a tradition dating back to Alexander the Great, and more recently illustrated by Pompey, founder of Nicopolis in Little Armenia (63 BC). Symbolically, the new city represented one example of his successful unification of the Roman Empire under one administration. Geographically, it constituted a major transportation and communications link between the eastern and western halves of the Mediterranean. Economically, it served to reorganise and revitalise the region, which had never recovered from its destruction by Lucius Aemilius Paullus Macedonicus in the Third Macedonian War (171–167 BC), or the further destruction under Sulla in 87–86 BC. It also established an important commercial centre and port at this strategic position on the Mediterranean sea routes.
On a hill north of Nicopolis where his own tent had been pitched, and north of the present village of Smyrtoula, Octavian also built a monument and sanctuary to Apollo, considered his patron god, and trophies to two other gods, Neptune and Mars for their contribution to its victory. This monument was adorned with the rams of captured galleys. In further celebration of his victory he instituted the quadrennial Actian games in honour of Apollo Actius.
In 27 BC, Octavian implemented an Empire-wide administrative reform. The new polis was considered capital of the territories of southern Epirus including Ambracia, most of Akarnania, and western Aetolia. Many inhabitants of the surrounding areas – Kassopaia, Ambracia, parts of Acarnania (including Leukas, Palairos, Amphilochian Argos, Calydon, and Lysimachia) and western Aetolia – were forced to relocate to the new city. Among other things, it obtained the right to send five representatives to the Amphictyonic Council. As a city in a senatorial province, Nicopolis began minting its own copper coins (until 268).
During the first five years or so of the city's foundation, local authorities supervised the construction of the city walls, the majority of the public buildings, including the theatre, stadium, gymnasium, odeion, and the aqueduct. The city's western gate was connected by a road to the Ionian harbour Komaros. The city eventually occupied a site of around 375 acres.
Although the exact legal status of Nicopolis is the subject of some dispute, unlike other Roman foundations in Greece contemporary with Nicopolis such as Patras, Philippi and, also in Epirus, Buthrotum and Epidamnus, the city was not, or was not only, a Roman colony (implying that Roman military veterans also settled there) but also a free city (civitas libera Nicopolitana) i.e. a polis (Greek city), free and autonomous, having the characteristics of civitas libera and civitas foederata, linked to Rome by a treaty (foedus).