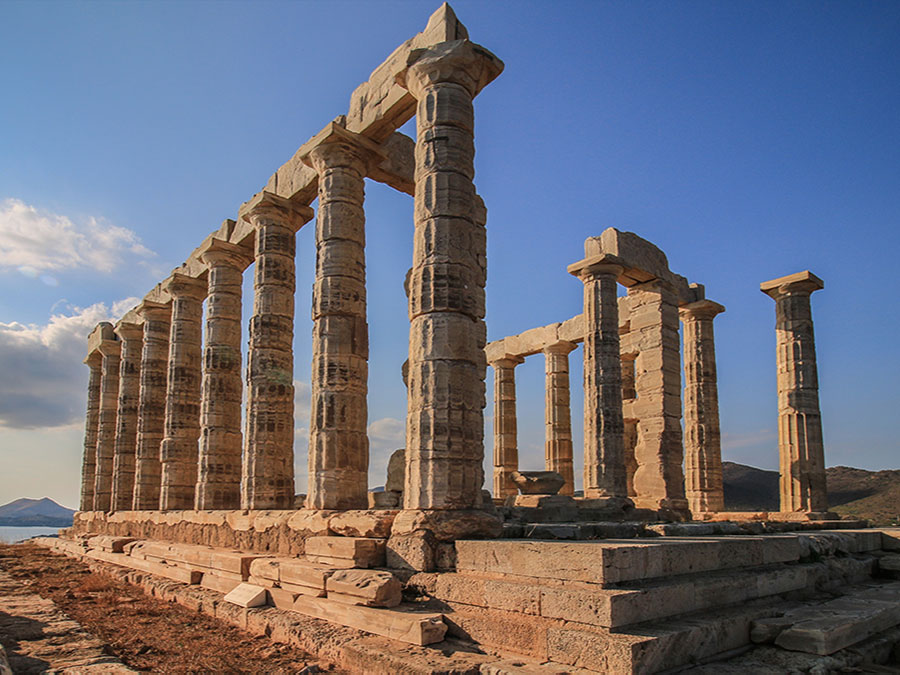 Cape Sounion, the southernmost tip of Attica, is a significant strategic point, whence the city-state of Athens controlled the sea passage to the Aegean Sea and Piraeus, the central port, as well as the Lavrion peninsula, comprising the rich silver mines thanks to which Athens emerged as a leading power in the 5th century BC.

The fortress and sanctuaries belonged to the deme of Sounion, formed through the state reorganization by Kleisthenes in 510 BC. The deme belonged to the tribe of Leontis and extended in the area between Lavrion, Megala Pefka, Kamariza (Agios Konstantinos) and the cape. The settlement in the fortress probably forms the center of the deme, of which more remains are also known. In the surroundings of the fortress, a settlement is located over the port and a cemetery of the classical period on the shore where the church of Saint Peter is, as well as part of a settlement of roman times west of the church.  Prehistoric habitation is also attested in the area. Graves of the Early Bronze Age period (3rd mil. BC) are reported on the cape.

Homer was the first to refer to Sounion (Odyssey c 278) as “the sacred cape of the Athenians”. Herodotus (6,87) informs us that the Athenians celebrated there a great four-yearly festival. Poseidon’s sanctuary is mentioned by the tragedians Euripides and Sophocles and the comic poet Aristophanes.  Information is derived from writers like Strabo (Geography, 1st cent. BC – 1st cent. AD) and Stephanus of Byzantium (Ethnika, w. Sounion, 6th cent. AD). A concise account was written by the traveler Pausanias (Description of Greece) in the 2nd cent. AD, when the sanctuary of Poseidon had declined and the temple of Athena was already deconstructed to the foundation level and transported to the Athenian agora. The traveler wrongly mentions that in the temple visible on the cape Athena was worshipped, a misconception that lasted until 1900, when inscriptions found in the excavation proved that the temple was dedicated to Poseidon.  The temple of Athena was recognized by its odd architectural plan, described by the Roman architect Vitruvius (De Architectura, 1st cent. BC).

From the 17th century on foreigner travelers (G. Wheler / 1676, J.-D.Le Roy / 1754, R. Chandler / 1765, E. Dodwell /1805, A. Blouet /1829 et al.) to Sounion viewed the ruined temple of Poseidon in a romantic mood. The standing columns made the cape known as Kavokolones.  Blouet, as archaeologists and architects of the Dilettanti Society had done (1797), attempted to draw and study the ruins, proceeding also to partial excavation of the sanctuary gateway. Romantic visitors of the temple, like Lord Byron in 1810, engraved their names on the marbles.  The scholarly investigation of the Poseidon temple started in 1884 by the archaeologist – architect W. Dorpfeld, Director of the German Archaeological Institute. The archaeologist Valerios Staes excavated systematically (1897-1913), expenses of the Archaeological Society in Athens, the temple, the wall and the settlement. Works for the restoration of the temple are ongoing since 1875, while its present state is a result of the work conducted by the Greek Archaeological Service in the 1950s, under the architect – archaeologist Anastasios Orlandos, an expert on the monument.  Through the realisation by the Ministry of Culture and Sports (2011-2013) of the project “Arrangement of the Archaeological Site of Sounion” co-financed by Greece and the European Union (ERDF), all the monuments were set forth, so that the composite and important character of Sounion for the city – state of Athens can be perceived.

Inside the fortress, the summit is occupied by the sanctuary of Poseidon. Entering through the gate at the NW part of the fortification wall, one ascended through the settlement which covered the slopes to reach the monumental gateway of the sanctuary. Nowadays, the visitor enters the fortress crossing over the east part of the wall. In the sandy cove north of the cape the port was located. On the rocky shore at the entrance of the inlet, ship sheds were cut out for warships to be hauled. About 400 m to the northeast, the sanctuary of Athena occupies the flat top of a low hill.

1. The Sanctuary of Poseidon
Homer testifies to the sacredness of the area at least from the 8th century BC. In the archaic period (7th- 6th cent. BC) the sanctuary was thriving, though lacking monumental arrangement. Plenty of votive objects were found buried in depositors, gathered there following the destruction of the sanctuary by the Persians in 480 BC. At the end of the archaic period construction of a monumental temple of limestone began, which was destroyed by the Persians before being completed. The temple was rebuilt on the foundations of the previous one around 444-440 BC. In the classical and hellenistic times (5th - 2nd cent. BC) the sanctuary was frequently visited. A grand four-yearly festival was organized, officials sailing there in a sacred ship, as in the sanctuary on Delos island. With the decline of Greek religion the sanctuary was abandoned and the temple gradually decayed.
The sacred precinct of Poseidon, occupying the highest area in the fortress, is defined by a wall except for its south precipitous side, on a surface of around 5000 m2. It was entered through a monumental gateway at the NE. The most important building is the temple of Poseidon, in the south part, while the NW part is occupied by the big north portico and the smaller west one.
The doric temple seen today was built of local marble from the Agrileza quarries on top of the destroyed archaic temple. Palmette antefixes crowned the gable roof. At least the east pediment (on the entrance side) was decorated with statues. On the same side a relief frieze was running on the top of the interior of the colonnade. On the Parian marble frieze slabs scenes of the Centaur battle and the deeds of Theseus are sculpted, an allegory for the victory of the Greeks led by the Athenians against the Persians and for the superiority of the Athenian democracy over the eastern monarchy. The temple is attributed to the same architect with the ones of Hephaistos (?Theseion?) at the Athenian agora, Ares at Akharnes and Nemesis at Ramnous.
2. The Fortress

The city - state of Athens fortified for safety reasons at its frontier several sites of strategic importance, among which cape Sounion.  The walls extend to a length of about 400 m on the north and east sides, cutting off the cape from the land. They enclose an area of about 4 ha occupied by the sanctuary of Poseidon and a settlement of the deme of Sounion. They are not of a uniform quality, since through time they underwent several repairs and alterations following the defense needs. The wall, 3 - 3.5 m wide, is built of two parallel fronts, with a fill of stones and soil. On the inner side, two stairways leading to the upper part of the wall were revealed. The entrance gate is located on the NW, accessible from the port.

A settlement extends on the better part of the area inside the fortress. The main feature is a street, 3-3.60 m wide and 100 m in revealed length, climbing up the slope from W to E. On both sides of the main street and perpendicular to it, narrower streets formed regular blocks (30 X 30 m). Four houses must have formed each block only partially exposed. The settlement housed the garrison. However, the lay-out, the type of houses and the movable finds suggest that it was the centre of the Sounion deme. It endured for a long time and the buildings underwent several repairs and transformations. The phase now visible belongs to the Hellenistic period (end of 4th and 3rd cent. BC).
The port of Sounion was located at the sandy cove north of the fortress, protected from north winds. It was an advanced naval base of the Athenians, but also a commercial station. Commercial ships could be hauled on the sandy beach, while for the maintenance and keeping of warships ship sheds had been built.  A ship shed for two ships was cut out on the rocky shore at the cove entrance. It is a rectangular alcove, 11.50 m wide, penetrating the slope for 20.50 m. Along the floor, cut out at a slant, two parallel trenches 1.25 m deep were dug out, suitably arranged for hauling and launching the ships. Another ship shed for one ship is located a little further to the E.
3. The Sanctuary of Athena

The top of a low hill about 400 m to the NE of the sanctuary of Poseidon is occupied by the sanctuary of Athena. A trapezoid enclosure of limestone (about 46.50X44 m) runs around the flattened top of the hill and defines the sanctuary with the temple of Athena, the small temple and the depositor. Right to the north, an older sacred precinct is located, the so called ?of Phrontis?. The temples of the sanctuary were deconstructed, as usually practiced in the roman period with the abandoned temples in the periphery, and transported to adorn the Athenian agora.  At the temple of Athena the cella was bordered by a colonnade only on the east and south sides. The marble columns were unfluted, with ionic capitals. In the back of the cella the foundation of the pedestal for the cult statue is preserved. The altar is placed south of the temple, apparently because the spacious plateau at the south was suitable for the worshipers to gather and for the offerings to be placed. The temple was built around the middle of the 5th cent. BC. According to another view, it predated the Persian wars and only the exterior colonnades were added.  The small temple (4.96X6.80 m) is located at the NE consisting of a cella with two columns in the front. In the back the base for the cult statue is of grey marble of Eleusis. Opposite the main side the altar is located. The temple was probably dedicated to the goddess Artemis. It dates to the archaic period (600-500 BC) and was destroyed by the Persians (480 BC). According to another opinion it is contemporaneous with or later than the big temple of Athena.

In the SE area of the sanctuary there is a wide trench 15 m deep accessible through 15 hewn steps. The initial use remains obscure. Later, probably after the Persian wars, the old offerings were deposited in it. They date from the 9th to the mid 5th cent. BC, when the trench was covered.
At the NW part an almost circular wall of roughly hewn large stones defines a precinct older than this of Athena. In the precinct, apparently a sacred grove, a hero was worshipped, probably Phrontis, the helmsman in Menelaus' ship during the return from Troy to Sparta, who died and was buried at Sounion (Odyssey, c 276-285).  The old precinct and the depositor with the oldest of the finds evidence a most ancient cult that had started in the area of the Athena sanctuary.