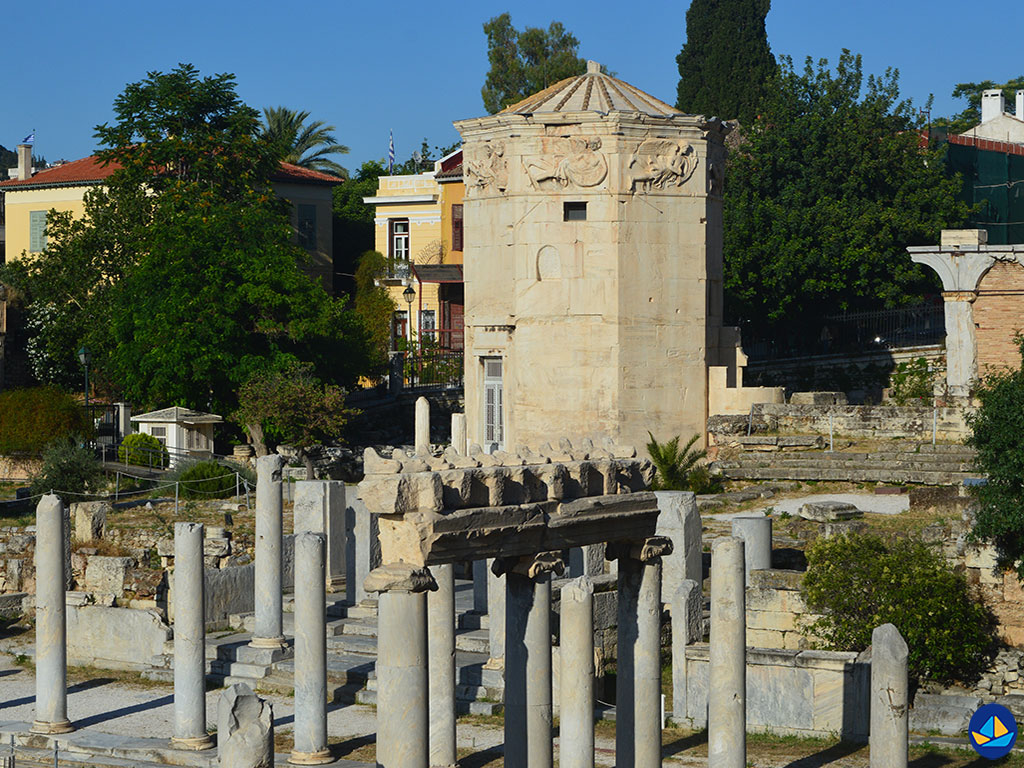 The Horologion of Andronikos Kyrristos, also known as "The Tower of the Winds" is an octagonal tower that stands on a base of three steps and is built of white Pentelic marble. It is also called "Aerides" which means Winds. The Tower of the Winds is 12 m tall and each side has a length of 3.20 meters. It has a conical roof, on which there was a brass wind vane Triton, to indicate the wind direction. At the top of each of the eight sides there is a relief representation of a wind, symbolized by a male figure with the appropriate attributes and its name inscribed on the stone. The names of the eight winds deities are: Boreas (N), Kaikias (NE), Apeliotes (E), Eurus (SE), Notus (S), Lips (SW), Zephyrus (W), and Skiron (NW). There were sundials in the external walls and a water clock in the interior. The Tower has two entrances, one to the north and one to the west. It is considered the world's first meteorological station

It is located in the Roman Agora, in the district of Plaka in Athens. The district that developed around it is also called Aerides district. The monument is considered to have been built by the astronomer Andronicos, from Kyrrhos in Macedonia in the first half of the 1st century BC. During its long history it has changed use many times. During the early Christian times it was turned into a church while in the 15th century served as a temple of Aeolus, according to Cyriacus of Ancona. Under Ottoman rule, it was used as a tekke of the Dervishes (Muslim monastery). During that period the tower was half buried. Traces of this are still visible in the interior of the Tower where Turkish inscriptions may be found on the walls. The Tower of the Winds was completely excavated between 1837 and 1845 by the Hellenic Archaeological Society.