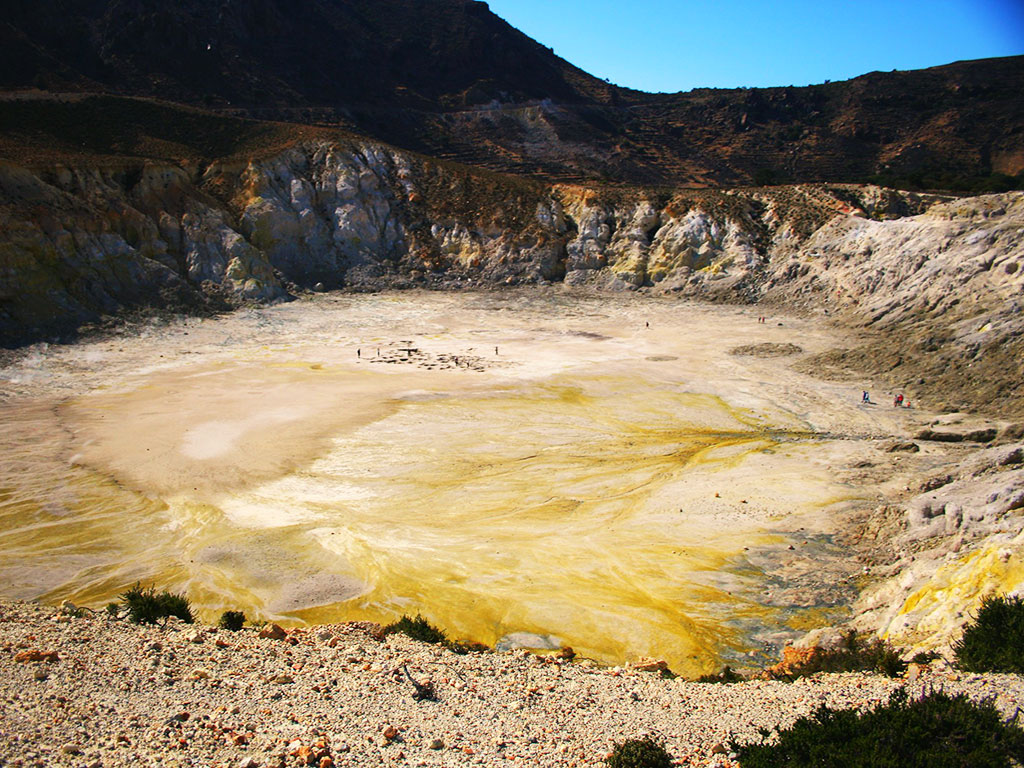 The Crater of the Volcano

Nisyros is one of the more active but less known volcanoes in Greece. The volcano of Nisyros is the youngest one and is part of the Hellenic Arc, a curved line of volcanic centers which are caused by a subduction zone, and stretches from the Saronic Gulf opposite Athens via the island groups of Milos, Santorini, and Nisyros. It is believed that the volcano last erupted in 1442. The island has a 4-kilometre (2.5 mi) wide caldera at an altitude of 100 meters above sea level. Within the caldera there is a number of craters caused by hydrothermal eruptions.

The eruptions are caused by the pressure exerted on the ground by the steam generated by the overheating of rainwater and seawater, after contact with the molten ground magma. The temperatures reach 400 to 500 degrees Celsius and so the water turns to steam. The vapor exerts tremendous pressure on the rocks that prevent him from reaching the surface and when it manages to overcome the weight of these rocks, it ejects them in the air, causing a hydrothermal explosion. Eight of the craters on the caldera are well preserved and each has its own name.

Among them is one of the most recent, imposing, famous and largest hydrothermal crater in the world, named Stefanos Its diameter stretches between 260 and 330 meters, and it has a depth of around 27 meters. It is estimated that Stefanos is between 4,000 and 5,000 years old. Next to him is a smaller one named "little Stefanos". The rest hydrothermal craters are situated in the area of Lofos and are known by the names Logothetis, Polyvotis, Mikros Polyvotis, Alexandros, Achilles and Logothetis. Stefanos is one of the only active volcanic craters you can walk in anywhere in the world. Although the volcano hasn’t erupted in recent years, hot puffs of steam hiss as you tread gingerly across Stefanos's crackling yellow surface.

The crater is one of the most important attractions of the island and a must visit sight for everyone who visits Nisyros. There is an entrance fee if you wish to visit the area of the craters.