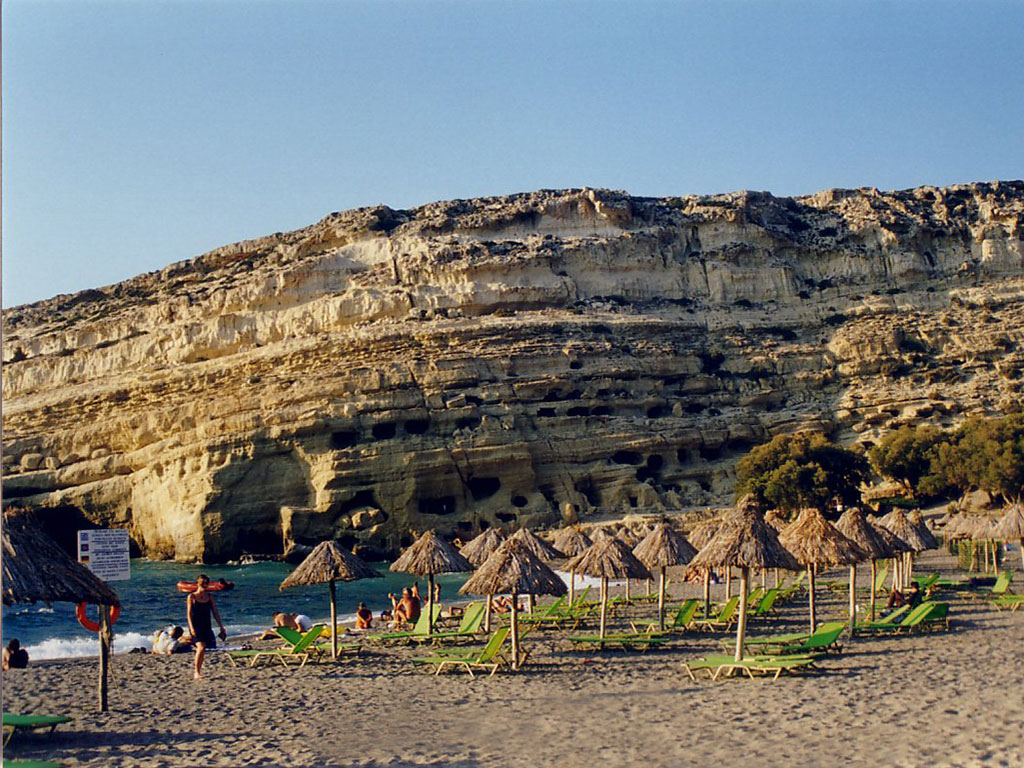 Matala is a gently sweeping sand and pebble beach with crystal clear deep waters, located in the safe natural harbour on the Bay of Messara. The beach is 300m long and 45m wide. The waves, due to frequent westerly winds, are very large and impressive. Also on the north side of the beach, there is a large cave, on top of which, some very adventurous visitors dive.

Although it has become a popular tourist destination it still retains the charm and character of the quiet fishing village it started as at the beginning of the 20th-century, and the laid-back lifestyle of the hippies of the 60’s and 70's lives on. Many of these hippies camped out in the complex of caves that are carved into the sandstone cliffs at the northern end of the beach. Unfortunately these 20th century visitors left there mark on the caves at Matala There is also a mural on a wall across the beach declaring: “Today is Life, Tomorrow Never Comes”, apparently painted on the seawall to welcome Beatle George Harrison. One of the most extraordinary beaches in Crete was discovered by the freedom-loving hippies in the sixties and today is the site of a music festival every year in June.

Matala is well known for the sandstone rock cliffs with their famous caves sliding into the sea at an odd angle, creating one of the most unusual beachscapes on the island. Nobody knows how the caves were created but it is believed that they were first hollowed out as Roman or early Christian tombs.

Matala beach is located 68km southwest of Heraklion, between the plain of Messara and Asterousia Mountains. A visit to Matala can be combinen with a visit to the archaeological site of  Phaistos. There are regular buses from Heraklion.