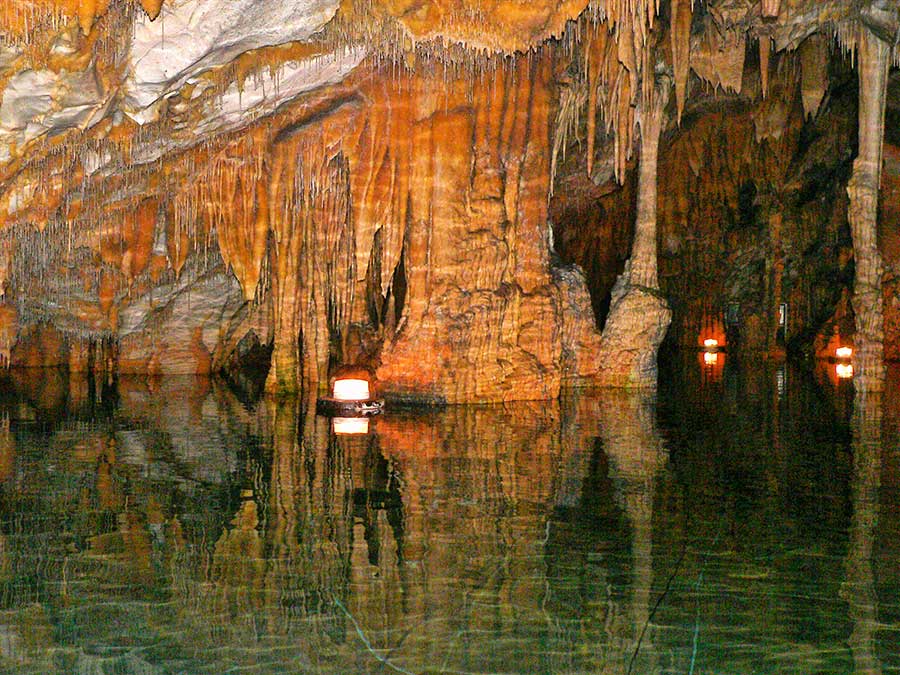 The cave Glyfada (or Vlychada) Diros is one of the most beautiful caves in the world. It is located on the west coast of Laconian peninsula, in the bay of Diros. Under this simple landscape of Mani's nature with unparalleled art and patience smacked a wonder beyond fantasy, white stalactites and stalagmites, impressive curtains and glowing crystals embellish every corner, creating with that way an unparalleled breathtaking spectacle.

Its existence has been known to the locals since around 1900. But no one suspected the miracle he hid inside until 1949 when the founders of the Hellenic Speleological Society, John and Anna Petrochellou, began to explore it systematically. Until 1960, 1,600 meters have been explored and mapped, while today the known length of the cave is over 15 kilometers. The 1970s underwent the first underwater exploration. At a point in the cave the depth reaches 100 meters.

The cave began to form hundreds of thousands of years ago. The stalactites and stalagmites presently below the water were formed when the surface of the sea was far below its current level. The water inside is brackish and has a high hardness. Its temperature is about 14 C, while the air ranges from 16 to 19 C. The water that penetrates into the cracks of the limestone rock and dissolves it, creates literally a drop of drops, the decoration of the cave. The precipitate of dissolved calcium carbonate forms very slow stalactites and stalagmites.

Its natural entrance has a diameter of only half a meter and is very close to the surface of the sea. In earlier times the cave had other entrances that were gradually closed. Inside the cave are found fossilized bones of panther, hyena, lion, deer, ferret and the largest hippopotamus in Europe. Close to its natural entrance, ceramics have been found indicating the human presence. Significant anthropological finds from the Neolithic era were discovered in the nearby Cave of Alepotrypa. Many of these are exhibited at the museum next to the entrance of this cave.