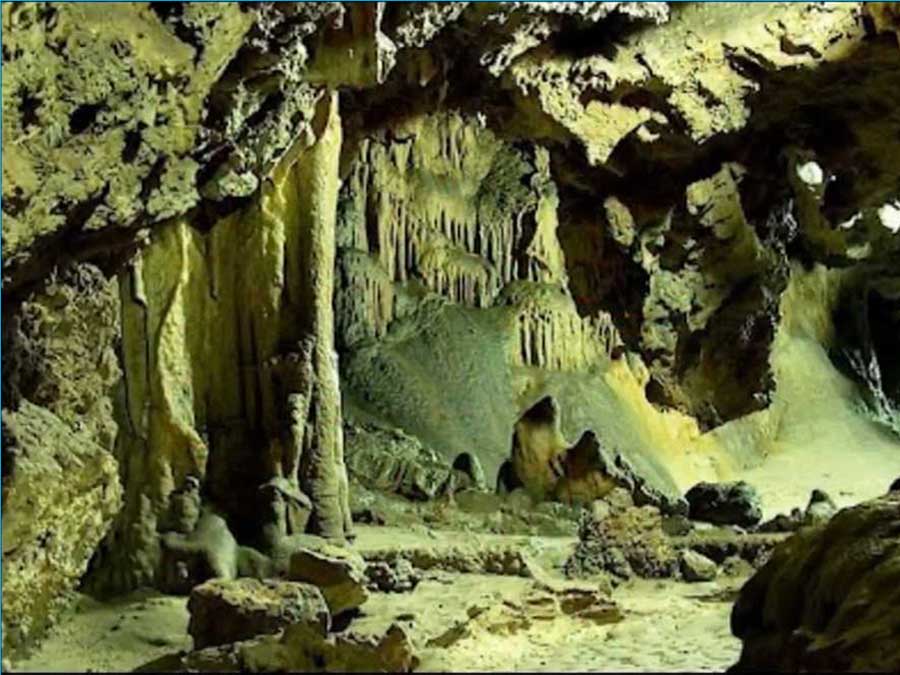 The cave of Saint Sophia is one of the three caves with the same name in Kythira. The other two are in Agia Pelagia and Kalamos. According to local legends, these caves are joined together.The cave of Agia Sophia Mylopotamos in Kythira is the first one which studied scientifically in Greece in 1930 by the Patriarch of Greek Speleology Ioannis Petrohilos and his wife Anna, who were from Kythera. The cave is located on the west coast, in Kokala bay and it is 4 million years old.

Already from the 13th century the Kytherians turned the cave's antechamber into a place of ecclesiastic worship. Hagiographies, which depicting whole-body forms of saints, adorn the anterchamber of the cave. At the 17th. century the foreign travelers who arrived on the island depict in their testimonies the awe that caused this dark chasm of the earth. Inside the cave, the old engravings that exist have names and dates which remind the present visitors that before them preceded many others; such as the English travelers of 1810, but also the Kytherians who sought shelter in the cave during the Occupation. Among the figures depicted at the anterchamber are Saint Sophia and her three daughters, Love, Faith and Hope. The frescoes, painted with the fresco technique, are preserved in excellent condition, thanks to the lack of light, humidity and constant temperature that prevail permanently in space. Immediately afterwards, the visitor meets the newest chapel, built in 1875. A little further, there is a hollow that fills with the water dripping from the roof; it used as a font to cure the children who born with health problems. Hence, the cave of Mylopotamos took its name thanks to Saint Sophia, although another tradition claims that the three homonymous caves on the island were initially devoted to God's wisdom.

According to mythology, Paris and Helen of Troy, when fled from Ancient Sparta, found shelter in the Cave of Saint Sophia. There, according to tradition, they celebrate their wedding, a modest ceremony that took place in the cave's vestibule. The wedding became so as Helen not to be considered a concubine or adulterer of Paris. We also have to mention that the Beautiful Helen - according to the local tradition - created in the cave of Saint Sophia the first foundling nursery, which provided care and shelter for abandoned infants. It is perceived that the cave is associated with dozens of myths and legends. Also, according to other myths, Pirate Barbarossa is said to hide his treasures there.

The inside of the cave of Saint Sophia promptly attracts the attention of the visitor. The polymorphic dappled decoration is excellent with the magnificent lithospheric complexes. There are impressive color variations of black, white and red due to the chemical composition of the rocks of the area. Its halls can generally be characterized as spacious and their height in some places reaches seven meters. So there is no feeling of discomfort due to inadequate ventilation of the guest rooms.

It is worth noting that the fauna of the cave hosts a rare endemic species of the equator, Kythironiscus Paragamiani, which owes its name to the biologist Kalust Paragamian, a member of the Hellenic Speleological Society.