The submarine Cave of Elephants is located in Drepano area of Akrotiri, in Chania prefecture and out of Souda Bay. The cave was discovered in 1999 by the snorkeler Manolis Efthymakis and was then showed in January 2000 in Star TV by the professional diver and filmmaker G. Tzanakis. Thus, Ephorate of Palaeoanthropology and Speleology, in collaboration with Creta's Diving Center, organized the first mission to explore the cave on 31th March 2000. The findings were fantastic: apart from the breathtaking beauty of the cave, bones of unknown elephant species were also found.
The cave has been shaped in Mesozoic limestone. The entrance of the cave has 9m height, 6.5m width, starts at a depth of 10 meters below sea level and continues in a tunnel about 40 meters in length. The rest of the cave has 125m length and an average width of 25m. It is the main room of the cave and, because of its morphology, it is partially filled with water. The depth of the room (under water surface) ranges from a few centimeters to 4 meters, while the ceiling height above the water surface reaches 10m in some points. The roof of the cave is full of reddish stalactites, indicating aluminum and iron content in the rocks. In the water there are many stalactites, which states that once the floor of the cave was not covered by water. The study of sediments (organic, clastic and chemical) shows with certainty that the cave in previous seasons was dry. Moreover, the air inside the cave is breathable.
The most importantly findings of the cave was the identification of palaeontological material. An initial study showed that it consists mostly of bones of elephants and a very small percentage of deer bones (Cervidae). These findings were new for Crete are the unique coming from submarine caves.
From measurements made on the discovered skeleton parts of the elephants, it could be argued that they belong to new endemic species, which was named elephas chaniensis, after the area of Chania. Their size was bigger than this of the current elephant and smaller than the antiquus elephant. The fossils of elephants belong to three adults at least and to a younger member. The Elephas Chaniensis was three feet high and, although it had significant differences from the African and Indian elephant, it had thicker bones and huskier body. The age of the bones is estimated at 50,000-60,000 years. The migration of these species in Greece, is estimated that happened before 15 million years, when there was a single land area from the Ionian Sea to the shores of Asia Minor.
The deer bones, also found in the cave, are interesting. They belong both to normal size deer and deer dwarfs (reaching just 30 centimeters). It is believed that the excessive increase in deer population (which seemed very similar to today's goats), significantly reduced the offered food and caused the extinction of elephants in the area. This is confirmed by the fact that the bones of elephants were found in lower layers than that of the deer bones and other smaller mammals.
The cave is a refuge for the protected species of Mediteranean Seal, monachus monachus. It is of foremost importance, since this is one of the most endangered mammals of Europe. Local diving centers organize tours in the cave. The experience is truly unique:
Visitors can admire the beautiful decor of stalactites and stalagmites (underwater and above the water surface) and see fossilized bones, which are embedded in the rocks of the cave. Visibility is very good, and there is no precipitate to reduce it.
When diving, attention and responsibility is required, because any awkward movement could destroy the stalactites that are still developing. 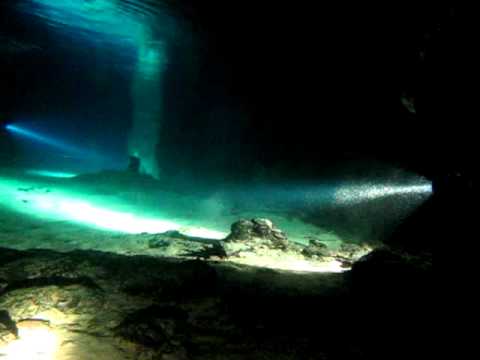