The Tree Church of Agios (Saint) Paisios in Konitsa, was built in a 300-year-old tree in honor of Agios Paisios. According to the Christian tradition, when Agios Paisios was young passed by this area, going to the neighboring village of Amarantos to perform carpentry work and repairs in local houses. The tree had suffered a lot of damage in the past from fires lit by travelers who wanted to warm themselves or barbeque. Signs of this damage are still visible if one notices the spot near the small bell at the chapel.

However, thanks to the initiative of local villager Harry Poretsi, the tree was shielded internally with stone and turned into a place of pilgrimage. Inside, there is a recess where visitors can light a candle, an icon of Christ and the Virgin and in the center the icon of Agios Paisios flooded with tribes of pilgrims. Externally, there is only a small bell. The little chapel arouse the interest of Greek and foreign visitors, since there are only a few similar chapels in Greece. The chapel marks the footsteps of Agios Paisios who is known for his spiritual guidance and ascetic life.

The Tree Church is located 22 km north of Konitsa, just a few meters past the junction at the village of Agia Varbara, along the road to Amarantos. Next to the Tree Church is the church of Agia Marina, and eighty meters farther away there is a small church dedicated to Agios Kosmas of Aitolos, and next to that is the chapel of Agios Athanasios, all overlooking the Sarandaporos river.

Agios Paisios was born on 25 July 1924 in Pharasa, Cappadocia, Asia Minor, today Turkey. His family settled in Konitsa, Epirus, during the population exchange between Greece and Turkey.  He grew up there, and after intermediate public school, he learned carpentry. He went to Mount Athos in 1940 but soon he had to return to his village in order to support his family. In 1953 he returned to Mount Athos and after a period he spent as novice, he was tonsured a monk in 1956. Venerable Agios Paisios or better known as Elder Paisios was canonized on 13 January 2015 by the Holy Synod of the Ecumenical Patriarchate, and the church commemorates his feast day on July 12. 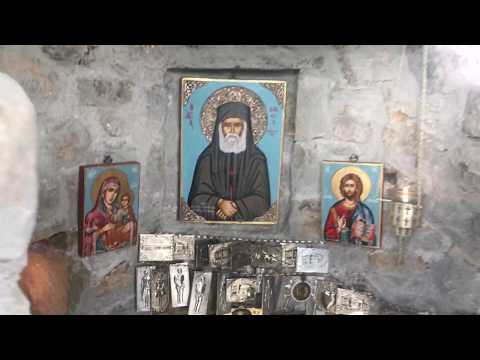