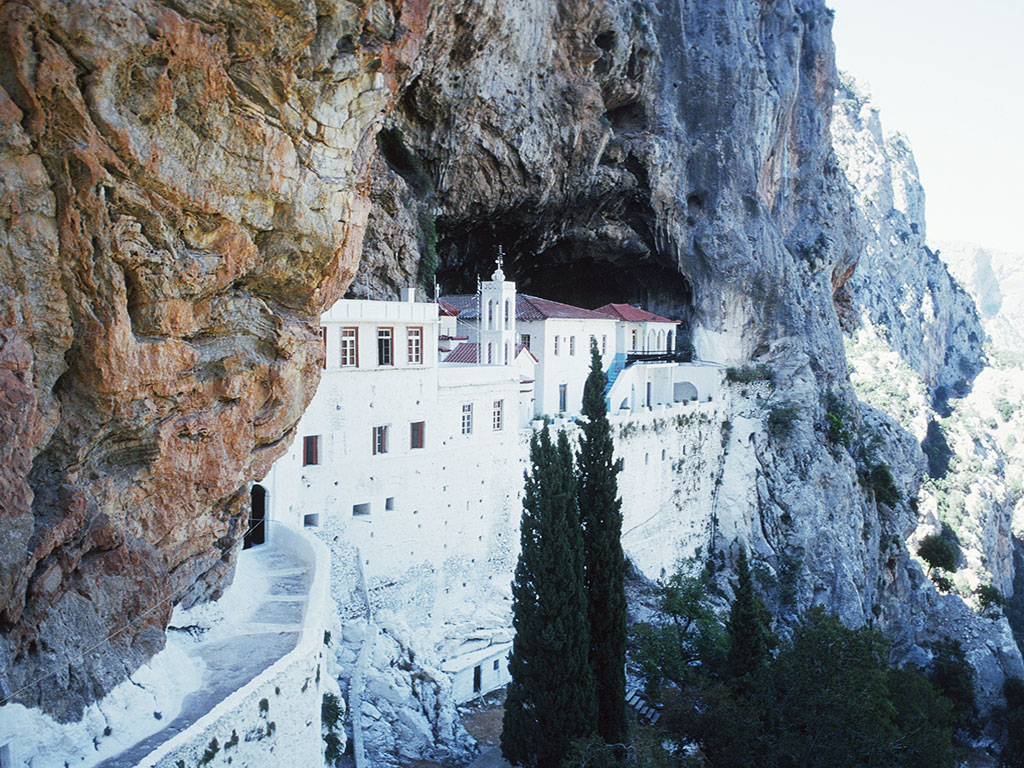 The monastery of Agios Nikolaos Sintzas is located six kilometers northeast of Leonidio. It is built in an area with many caves, in a location with difficult access, at an altitude of 500 meters. From the church of Aghios Nikolaos the view of the plain of Leonidion is magnificent. According to tradition, princess of Thebes Ino, sister of Semeli, mother of Dionysus, had raised her nephew Dionysus - the god of wine, figs and nuts - in the cave where the monastery is.

There are various theories according the name of the monastery. The most popular claims that the name Sintza is related to the Tsakonian "suntza", which means “fig tree”, most probably relating to a fig tree that grew in a cave near the monastery.

The Monastery was founded in the 17th century and renovated in 1783. The exact date of its foundation is not known. Above the entrance there is an inscription that bears the date 1783, but most likely refers to its renovation. The monastery, was certainly founded much earlier, since it is mentioned in a patriarchal sigil of 1622.

The monastery with its buildings is generally well preserved. In the surrounding area there are various hermitages, also carved in the openings and the cavities of the rock. The main church dating back to the 17th century is a cruciform church with an octagonal dome, supported by a four-sided base. Its current shape is significantly different than the initial one, since it has undergone through several reconstruction phases due to numerous natural and other disasters. In the interior, there are no frescoes and the walls are whitewashed. The wooden carved iconostasis with the four despotic icons is quite impressive. In the monastery there is a library with some handwritten Gospels with beautiful motifs and artistic letters. It was also the keeping place of the holy remains of the saints Nikolaos, Trifon, Paraskevi, Panteleimon, and Dionisios for some time. To the outside of the building complex, there is a water spring, and a roman tomb carved onto the rock beside that.

It was changed from a men's monastery to that of women in 1953. The monastery celebrates Agios Nikolaos (Saint Nicholas) on the 8th and 9th of May of every year, as well as Agios Dionysios every 3rd of October.