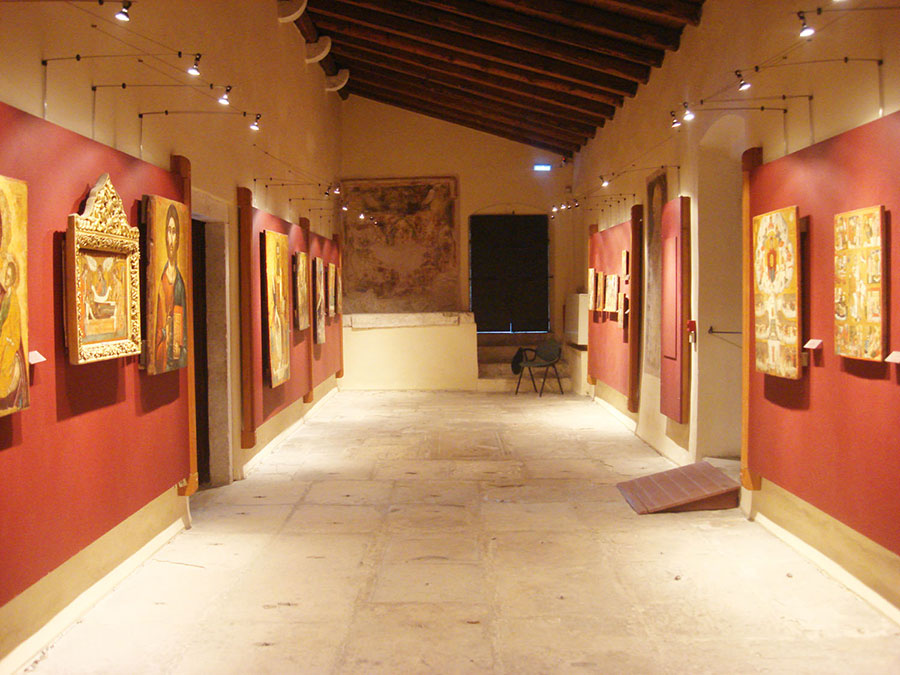 The Byzantine Museum is housed in the Panagia Antivouniotissa church. The church is dedicated to our Lady Virgin Mary Antivouniotissa (Antivouniotissa = opposite the mountains) and is one of the oldest and richest ecclesiastical monuments of the city. It was probably built at the end of the 15th century.

It is a single nave, timber-roofed basilica that preserves in tact the particularity of the Corfiot-Septinsular Basilica type church of that era, that is, the existence of an exo-narthex that surrounds the church on three sides. There is an atrium on the eastern side, were a belfry is incorporated.

The church internally is very impressive with high stalls, painted tapestries and a ceiling adorned with gilt coffers framing relief floral decorations. The templum and the floor of the church are made of stone.

On the narthex there are gravestones with carved names and coats of arms of noble families, high priests and other prominent members of the Corfiot society. In 1979 the proprietor families of Alamanos, Mylinopoulos, Rizicari and Scarpa decided to donate the rich in relics and portable icons church to the Greek State under the condition that it mast become a Museum of Christian Art.

In 1984, after the necessary renovations, Melina Mercury inaugurated the Church-Museum. In 1994, after the second and last stage of the renovations, the final exhibition of the icons took place.

In the Museum there are about ninety portable icons and soon the Museum will be completed with the exhibition of the archival material of the church. The exhibited icons date from the second half of the 15th century until the 19th century and are indicative of the role that Corfu played in the development of the Greek ecclesiastic iconography, especially after 1664, when many refugees Cretan painters arrived in Corfu either to settle, or on their way to Venice.

The visitor may see the icon of Virgin Hodegetria of Castelani, of the second half of the 15th century, from a Macedonian workshop, as well as the Saints Sergius, Bacchus and Justine, a work for the church of Trimartyros made after the battle of Lepanto (1571) by Michael Damaskinos.

There are also the icons of the Epitaph, by Emmanuel Tzanfournaris, the small icon of the three Archangels, of the first half of the 17th century, by George Cortezas, the icons of Emmanuel Lambardos and Jeremias Palladas, painters that are distinguished for their exceptional technique and their conservative attitude, and finally the Dodecaorton icons of Emmanuel Tzanes, his icon "Noli me tangere", an order by the Justiniani family in 1657, and individual works by the painters Angelos, Andreas Ritzos, Ioannes Moschos, Theodoros Poulakis, Victor, Emmanuel Skordilis, Stefanos Tzankarolas and Constantinos Contarinis.