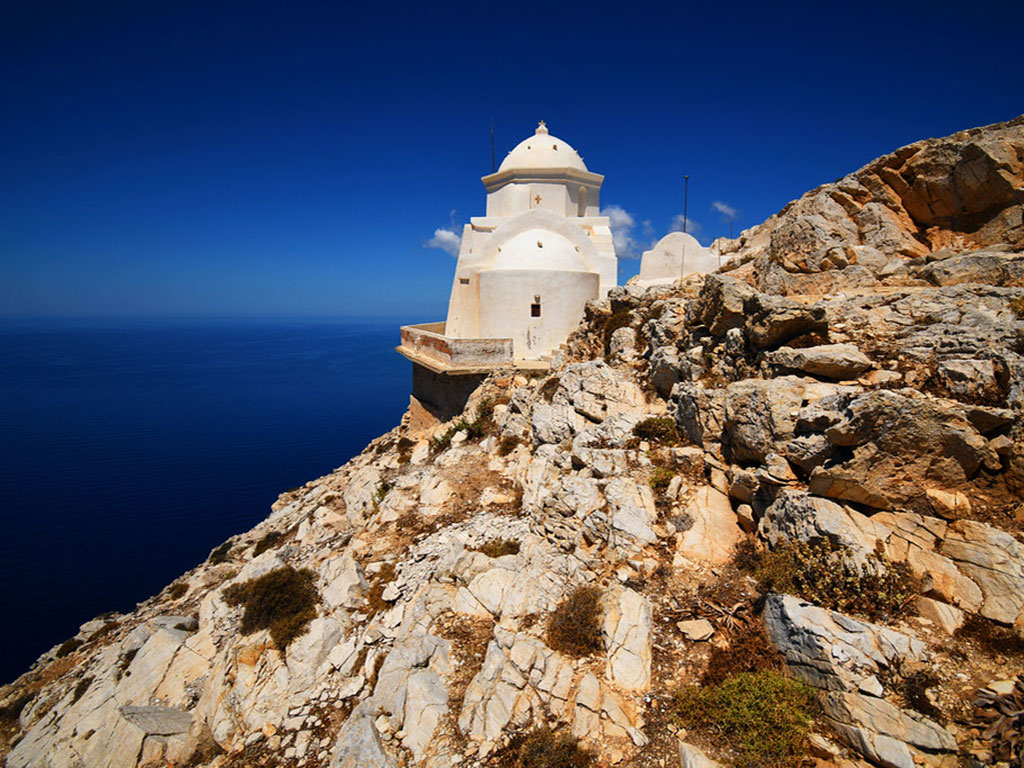 The monastery of Panagia Kalamiotissa is located at the top of the imposing Kalamos rock, the second highest rock in the Mediterranean after that of Gibraltar. The monastery celebrates every year on September 8. Two days before, a very interesting religious ritual is performed. The icon of the Virgin Mary is carried by the locals from the Monastery of Zoodochos Pigi to the top of the rock, where the old Monastery of the Virgin Mary is located. An orthodox ceremony takes place where monks sing and pray all night long, with lots of incense. Staying overnight there is one-in-a-lifetime experience, as you have the opportunity to enjoy a unique sunrise over the sea. The feast that takes place is accompanied by local dances and delicacies and is the most important on the island. The monastery is the most important religious monument of Anafi and one of its main attractions. The monastery was visited in 1700 by the French traveler Tournefort, who describes its location as one of the most terrifying in the world.

The church is dedicated to the Birthday of the Virgin Mary and is called Kalamiotissa because it is located on Mount Kalamos. According to local tradition, the miraculous icon of the Virgin Mary was found near the monastery, hanging on a reed. The monastery was built around 1600 and is a domed single-nave church with a double-arched bell tower and a wooden carved iconostasis, dating from the 18th century.

The path that leads to the monastery starts at the foot of the rock near the ruins of the sanctuary of Aiglitis. It starts pretty rough and steep so it is quite demanding. The second part is steeper but easier and the view as you ascend is breathtaking. It is well signposted and there is no way to get lost. If you are not used to walking or any kind of exercise you maybe want to reconsider. It is really a nice visit and definitely worth the hike as the view from the top is absolutely amazing with the endless blue of the Aegean and the surrounding islands. There is no water between the monastery at the bottom and Panagia Kalamiotissa at the top, no shade either, so take plenty of water and try to go early in the morning or late in the afternoon when the sun isn't beating down at its strongest.