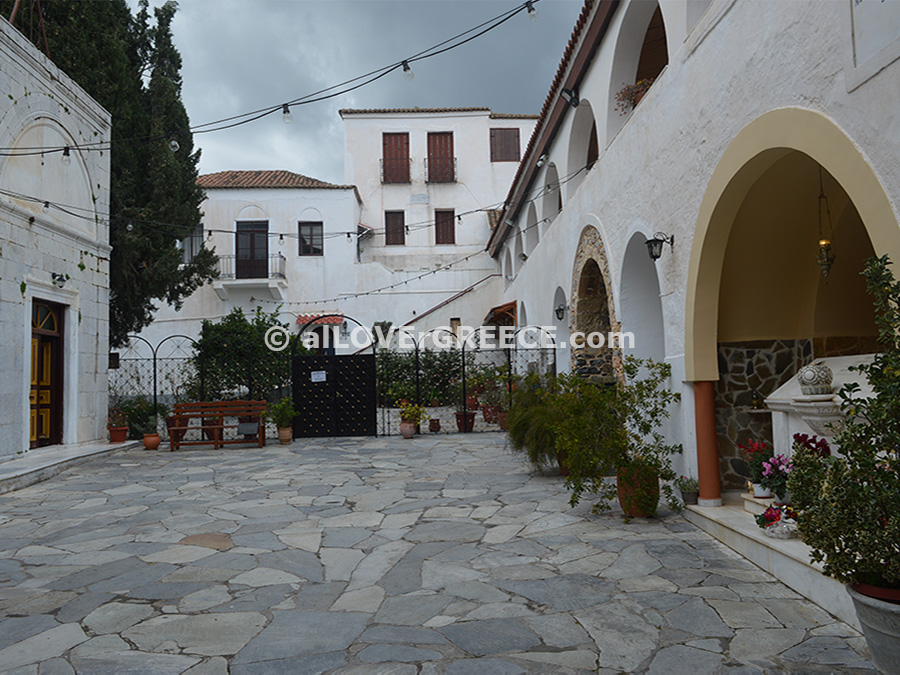 The Monastery of Panagia Faneromeni is located in the pine-covered area "Faneromeni" of the Municipality of Salamina.

The monastery is a three-aisled basilica with a central dome and four turret turrets. On the south side of the katholikon there is the church of Agios Nikolaos, where Saint Kara is placed by Saint Lavrentius. Also in front of the beautiful gate there is the Holy Tomb.

At the site of the monastery was built in 1979 the church of Αgia Sophia. The museum is used by the Church of Agion Apostοlon, which was founded in 1661.

The monastery has a hostel and a nursing home. In the courtyard of the monastery there is the tomb of John Goura killed on the Acropolis.

The monastery was built by Saint Lavrentios (as there was an 11th-century building) in the world, Lambros Kanellos, who came to the island from Megalo Pefko in 1670, following the suggestion of the Virgin Mary.

According to tradition, he passed the sea by tapping his mantle. Saint Lavrentios as Abbot of the Monastery offered important services to the Nation as the Monastery became the base of many fighters and refuge sheltered during the Ottoman domination.

After many years of hegemony he left the Monastery and settled in a small cell on a steep cliff of the mountain to the south of the Monastery. Saint Lavrentius resigned on March 9, 1707. The National Action of the Monastery during the Ottoman domination and during the Revolution of 1821 was remarkable.

The monastery found shelter for elderly people, women and children. There were spoils kept and meetings of chieftains were held. There were transferred wounded fighters for care and treatment. Also in the monastery were preserved valuable relics and the library of the Athens Community (1822). The abbot of the Gregory Hatzithanasiou - Kanellos Monastery became a member of the Filiki Etaireia.

The security of the Monastery must be emphasized, as it was never taken over by the Turks. In 1878, because of the Russo-Turkish war and for security reasons, the naval base was installed in Faneromeni area and a few years later, in 1881, moved to his current position.

The best access to the Monastery is by boat from Nea Peramos.