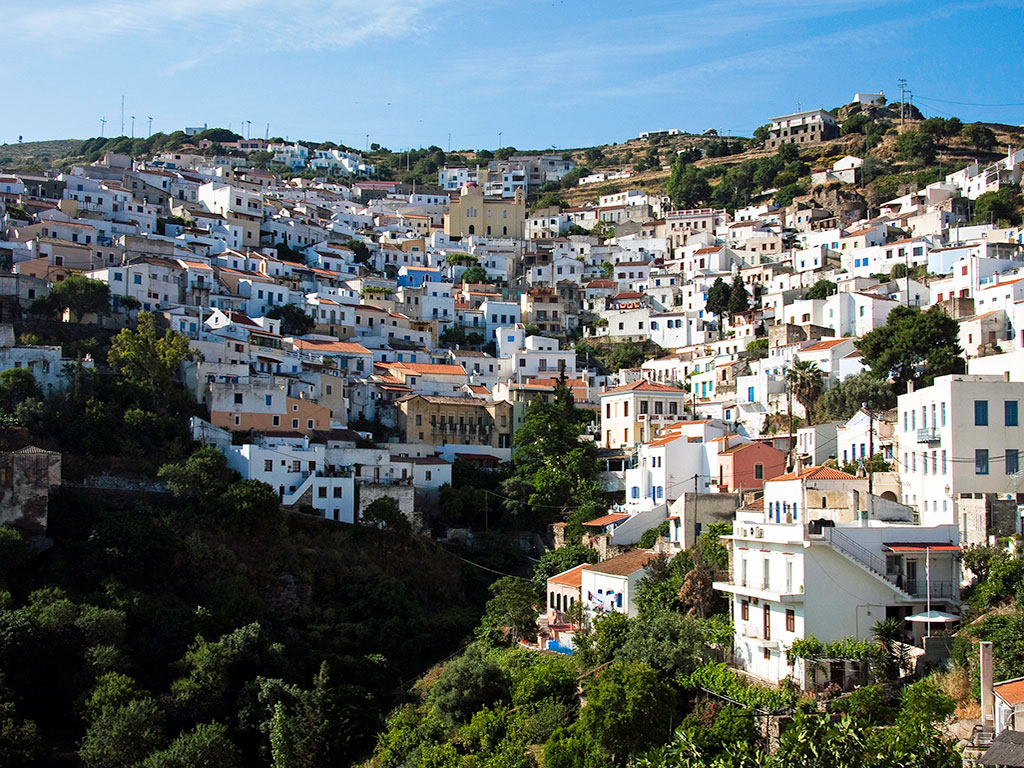 Ioulida or Chora is the capital of Kea and is 5.5 km away from Korissia, the port of the island. It is built amphitheatrically towards the interior part of the island, on the hills of Kastro and Mylon, in the place where ancient Ioulida was. Ancient Ioulida was founded during archaic times. It was the only one of the four cities of Kea that flourished in the past, along with Karthea, Korissia and Piiessa, all built inland. Ruins of the fortress of the ancient citadel and part of the wall are still preserved. On the ruins of the ancient city, the Venetian Domenico Micheli built a castle around 1210, using building material from the ancient fortification walls. A castle that survives to this day.

Ioulida is a typical Cycladic village, with two-storey, tiled houses, cobbled streets and small squares. There are four settlements, representing the social position of the inhabitants. Kastro, in the northwest, is the historical center of Chora where the houses of the richest landowners and merchants are built and for that reason the houses are bigger. The district took its name from the Venetian castle built in 1210, with building material from the temples of the ancient citadel, as was the case with the houses of the district, in many of which we find built-in ancient reliefs. Nowdays only some parts of both the ancient wall and the castle survive, scattered in various places. Here you can find the church of the Patron Saint of the island, Agios Charalambos, who is honored on February 10.

Next to Kastro is Katichori, with Piatsa Square joining the two districts. In Katichori lived mainly merchants and is dominated by the metropolis of Ioulida, dedicated to the Annunciation of the Virgin, known as "Dimotikia". Mesada was the flat part of Ioulida, the meeting point of the village. Finally, Panochori is the highest part of Ioulida. It extends around the perimeter of Mesada and consists mainly of small houses separated by narrow alleys.

One of the most important sights of the island is the imposing archaic statue of the Lion of Kea, located in the northeastern part of Ioulida. In the main square is the Historic Town Hall, an impressive neoclassical building dating from 1902, designed by the architect Ernst Ziller. It is decorated with findings from the various archaeological sites of the island. Near the fountain "Tria Pigadia" you can find the new Town Hall of Ioulida which has been designated a monument, designed by the same architect. In the Archaeological Museum of the island, there are interesting exhibits from the excavations around Kea.

Ioulida, just like the rest of the island, is surrounded by fields and orchards shaped on the slopes in terraces, in “ochtes” as the locals call them, separated by rocky walls. The entire area is full of dispersed springs, with basins for the watering of animals. On the top of the Mills’ mountain, there is the biggest complex of windmills in Cyclades with 26 half-abandoned mills, that once upon a time were producing big amounts of barley. The mills are an indicative sample of folk architecture.

On the route from Korissia to Ioulis there is the remarkable valley of Mylopotamos, in the creek of which flows water from Ioulis and the rich spring of Flea, that ends up to Agios Nikolaos bay and contributes to the dense vegetation of the area predominantly consisted of cypresses. Because of the abundance of water, 11 cereal-grinding watermills functioned in this area, typical samples of the local folk architecture. The majority of them have been abandoned or transformed into guesthouses.