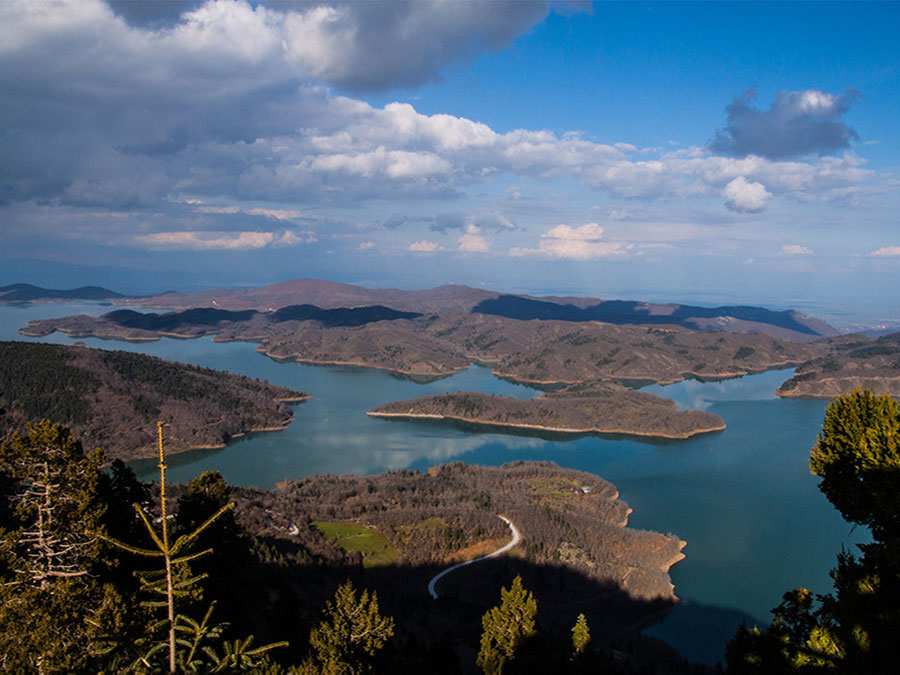 Lake Plastira is located on the plateau of Nevropolis and is about 30 minutes away from the town of Karditsa. It is 325km away from Athens and 250km from Thessaloniki. It is an artificial lake and its official name is Lake Tavropou. It was formed in 1959 with the completion of the dam at its southern tip and at the beginning of the Tavropos River. The idea for its construction was attributed to the military and political Nicholas Plastiras, when in 1935 visited his hometown where destructive floods had taken place from continuous rainfall. Seeing the point had reportedly said "here one day it will become a lake", so the lake got its well-known name.

In recent years, the lake has been utilized touristically, with many activities on and around it. Its perimeter is about 60km and you can cycle through the lake or around it, kayaking, do various mountain sports, horse riding, 4X4 and much more. You can bring your equipment or rent from the companies operating in the area. Lake Plastira will fascinate you any time of the year you visit it. Both the snowy landscape in winter and the lush nature in spring and summer create a wonderful spectacle. The verdant beech, oak and chestnut slopes of the surrounding mountains are reflected in the blue waters of the lake, creating a stunning picture. Enjoy refreshing dives at the facing organized beaches of Pezoulas and Lambrou, a distance that stretches for dozens of swimmers every August, making the Pan-Hellenic Crossing of Lake Plastira. It is not accidental that many say it is the lake of the four seasons and "Little Switzerland".

Many species of fish live in the waters of the lake such as eels, common carp, trout, bass, gibel carp, lavaret, tench, bleak, and roach. In the area we also find many species of birds, such as herons, Eurasian coots, various species of gulls, grebes and cormorants. Rarely there are sightings of little egrets, griffon vultures, peregrine falcons and golden eagles. On the west side of the lake, near Neochori you find a great botanical garden. At its ten acres you will get thousands of information about the flora of the area, as well as learn about some interesting species of local fauna, in the Wildlife and Bird Watching Observatory.

The most spectacular view of the lake will undoubtedly be enjoyed from the Observatory. Arriving at the Observatory, you let your gaze be lost on the water surface of the lake, with its fjords and its verdant islet. On the other hand, the wooded slopes and in the background, the imposing peaks of Agrafon complete the enchanting scenery.

There are various small villages all around the lake with sufficient infrastructure to welcome and accommodate the visitors. Some of them are Moshato, Kerasia, Anthohori, Krioneri, Kalivia Pezoulas and Neraida.