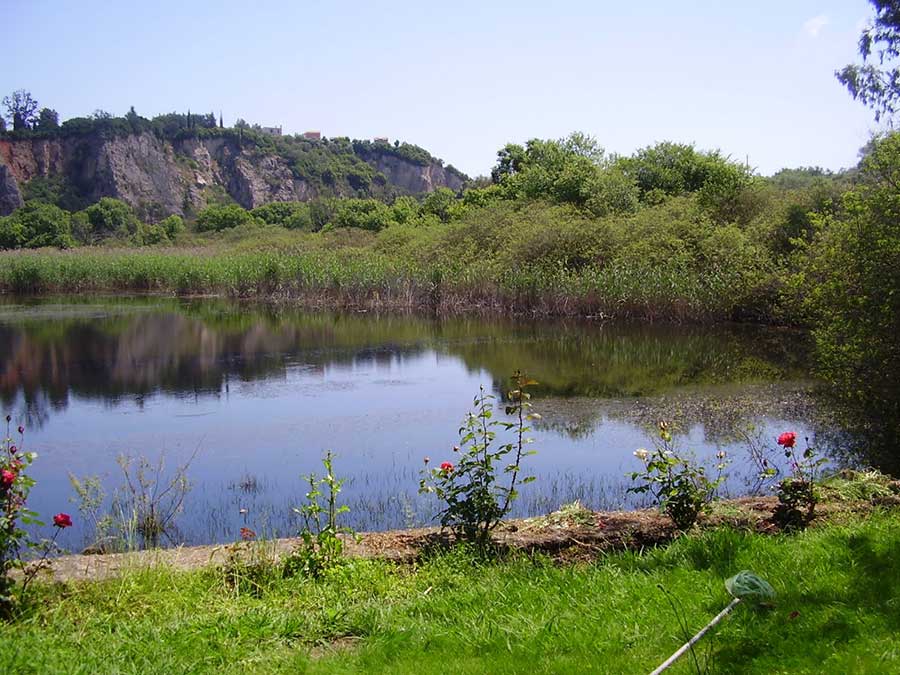 Lake Skotini is about 1.5 kilometers southwest of Gouvia in Corfu.

Well hidden below an old quarry, at the end of a dirt road in the region Danillia in Tembloni, is situated the small lake Skotini which became famous as one of the lakes where Gerald Durrell  would go during his stay on the island just before the outbreak of World War II. Skotini is home to an ecosystem of lush vegetation and aquatic life and attracts the interest of scientists who have mentioned it in articles of scientific magazines.

It is a shallow lake, in the inland of Corfu, in a region that hosts many similar wetland systems, particularly interesting and unique in the Greek islands. Most of it is covered by reeds (Phragmites australis) and only a relatively small area remains uncovered. This section gathers rich mossy vegetation. The lake keeps water all year round and, from residents' testimonies, it is used sporadically in the summer by helicopters for extinguishing fires.
Next to the lake there are roads and there are some houses and there is also quarrying of aggregates.
In addition to the reeds in the water, Ranunculus sp. and other wetland plants (Alisma lanceolatum) are grown, while in the wider area there is a long vegetation. The lake hosts a rich fauna. The presence of large populations of amphibians (Pelophylax epeiroticus) and the introduction of fish such as Gambusia affinis and goldfish (Carassius sp.) have been observed.