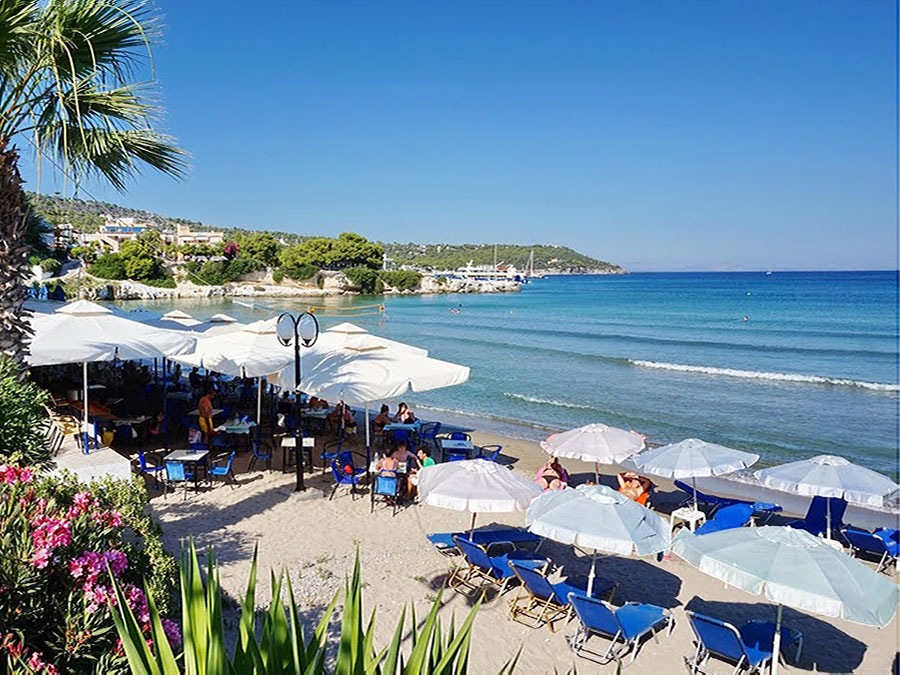 The road from the town of Aegina, goes though forests with pine trees and it meets the temple of Aphaia, which is a Dorian type temple. It also goes to the Monastery of Saint Nektarios and to the old medieval town with it's old churches and finally it ends up at Agia(Santa) Marina. Agia(Santa) Marina is a well known and a favourite summer destination for greek and foreign tourists. It has a big sandy beach, well organized with water sports available and the waters are not very deep. The beach is 500 meters long with many big pine trees. This is not the only beach though. There is another beach on the north of the wharf which is rocky and suitable for swimming and underwater fishing. In Santa Marina, you can find many hotels or rooms that you can rent, picturesque taverns by the beach, bars, shops with folk art and discos. At the beach, there is the church of Santa Marina, which celebrates its name day on the 17th of July. There is frequent transportation from the port in Piraeus to Agia(Santa) Marina. From Agia(Santa)Marina, we can travel to mountainous villages in Aegina. There is evidence that the area, particularly the headland, was inhabited since the 4th century B.C. In 1829, an archaeologist found this area to be cultivated yet uninhabited. Only two houses and traces of ancient structures existed here. Until the middle of the last century there were some orchards, two or three houses and few shops on the beach.