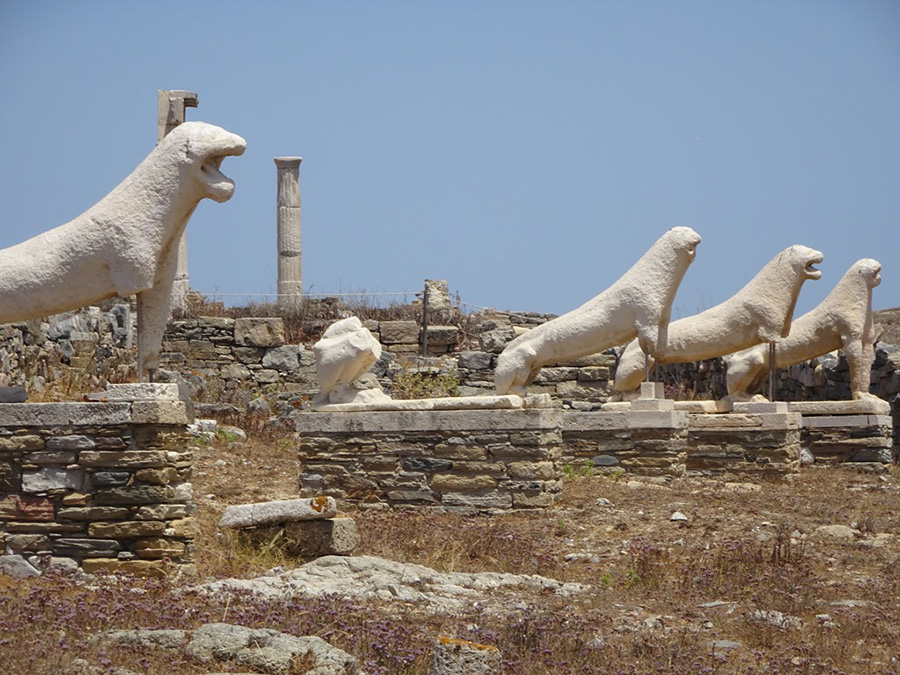 It is estimated that, circa 90 B.C., about 30,000 people lived on this small island, which is no more than a dot on the map of the Mediterranean. The names inscribed on the tombstones in the ancient cemetery provide us with evidence that during the 2nd c. B.C., apart from the island’s majority of Athenian and Roman residents, Delos was populated by folk from most Mediterranean cities: from the Peloponnese and Italy, from mainland regions, Central, Western Greece and Macedonia, Thrace, the Black Sea and Asia Minor, from the Aegean Islands, Cyprus, Crete, and faraway places including Troas, Mysia, Aiolis, Ionia, Lydia, Caria, Lycia, Bithynia, Paflagonia, Pontus, Cappadocia, Pisidia, Pamphilia, Cilicia, Syria, Media, Phoenicia, Palestine, Libya, Arabia and Egypt.

At this time, all these people, in spite of their varied nationalities and different historical and cultural backgrounds, managed to forge a peaceable society. They communicated with each other in spoken and written Greek, the inter-national language of the period, adopted the Greek lifestyle, lived in Greek-style houses and built Greek temples, where they freely worshiped the gods of their homelands. The islanders worked companionably and enjoyed community life, while their children played together, studied at same Gymnasium, and trained in the same Palaestrae.

Greeks, the antithesis of the zealous followers of monotheistic religions, were always willing to accept that their neighbour's god was indeed a god, often one of their own gods with a different name. Apollo, although a little hesitant at first, soon did not object sharing his island birthplace with Sarapis, Isis, Harpocrates and Anubis, or the God of Israel, the Gods of the Arabs, Atargatis and Adad, the Gods of the Phoenicians and the Roman Gods. So, perhaps for the first time in human history, in this small corner of the earth almost all the Mediterranean peoples co-existed in harmony.

The ships, arriving continuously at the harbours of Delos, carried not only merchandise but also people, news and ideas from almost every Mediterranean city. The whole world seemed like a small neighbourhood ringing the sea that brought them together and brings us together. The Mediterranean Sea, where the mystic East and the active, progressive, West encounter the Greece of reason, balance and harmony, the place where reason and sentiment coexist harmonically and an exuberant love of life is balanced with a tempered submission to destiny.

Delos must always raise some astonishment when one compares its size to its history. Although a small, rocky island, no more than 5 Km long and 1.300 m. wide, for ancient Greeks it was the most sacred place, because Apollo and Artemis, two of the most important deities of the Greek pantheon, were born there. It is situated in the heart of the Aegean, in the centre of the Cyclades that form a dance circle around it; “hearth of the islands” Callimachus (3rd cent. BC) calls it, i.e. shrine and centre of the islands.

The earlier inhabitants of Delos build (ca 2.500 BC) their simple dwellings on the top of the low hill Kynthos, where from they could easily inspect the sea around the island for coming enemies. The Mycenaeans, who came later on (end of 15th cent. BC), felt confident enough to settle in the small valley by the sea.

The Apollonian sanctuary, established at least since the 9th cent. BC, reached the peak of its glory during the archaic (7th-6th cent. BC) and classical (5th-4th cent. BC) period, when Hellenes from all over the Greek world gathered there to worship Apollo, the god of light, harmony and balance, and Artemis, the moon-goddess, his twin sister.

By the end of the 5th cent. BC there were already some houses and farms around the sanctuary. The town seen today developed rapidly after 167 BC, when, as a result of the declaration of Delos as a free port, all the commercial activity of the eastern Mediterranean was congregated on the isle. Rich merchants, bankers, and ship-owners from all over the world settled there, attracting many builders, artists and craftsmen who build for them luxurious houses, richly decorated with statues, frescoes and mosaic floors. The small island became soon the maximum emporium totius orbis terrarum - the greatest commercial centre of the world.

It is estimated that at the beginning of the 1st century BC, some 30.000 people were living on this little island that is no more than a dot on the map of the Mediterranean, and that it is likely that 750,000 tons of merchandise could be moved through its ports in a year.

The prosperity of the island and the friendly relations with the Romans were the main cause of its destruction. Delos was attacked and looted twice: in 88 BC by Mithridates, the King of Pontus, an enemy of the Romans, and later, in 69 BC, by the pirates of Athenodorus, an ally of Mithridates. Since then the island was gradually abandoned and fell rapidly into decline.

The excavations, that started in 1872 and are still in progress, have unearthed the Sanctuary and a good part of the cosmopolitan Hellenistic town.

Description of the Archaeological Site:

The modern visitor lands on a small artificial peninsula, between the Sacred Harbor (lost today under the debris of the French excavations during the beginning of the 20th century) and the commercial ports. Passing through the Agora of the Competaliasts, a marketplace of the ancient town with two small temples dedicated to Hermes, the god of commerce, and turning left, on the Sacred Way formed between two porticos, we reach the Propylaia, the main gate to the Sanctuary. Immediately to the right, after the Porpylaia, are the Oikos of The Naxians and the huge marble base of a colossal statue of Apollo, dedicated by the Naxians ca 600 BC. Parts of this statue can be seen in the Sanctuary of Artemis. Further north are the three temples of Apollo, facing Keraton, the most ancient and venerated altar built by Apollo himself.

The five Oikoi, or Treasuries, were used for the safekeeping of precious offerings of cities. The north boundary of the Sanctuary is a portico dedicated ca 250 BC by Antigonos Gonatas, a king of Macedonia. Within the Sanctuary are also the administrative buildings of the city: the Bouleuterion, the Prytaneion and the Ekklesiasterion buildings used for the assemblies of the deputies, the dignitaries and the citizens. The Monument with the Bulls, is a long building on the east part of the Sanctuary, where a warship, dedicated by the king Demetrius Poliorketes by the end of 4th century BC, was housed.

The north exit from the Sanctuary is between and Graphe and Ekklesiasterion. In Dodekatheon, a temple of the 3rd cent. BC, were found important archaic statues of the twelve gods that can be seen in the Museum. Further north is the Granite Monument and directly opposite it is the Letoon, a temple of the 6th century BC dedicated to the mother of the twin gods. Behind the Letoon is the largest building of Delos, the Agora of the Italians a market and meeting place for all the island’s Italian businessmen build ca 100 BC.

Along the road, to the right is the Sacred Lake filled up in 1925 due to an epidemic of malaria, and to the left the famous Lions dedicated by the Naxians by the end of 7th century BC. Initially there was perhaps a row of animals bordering from the east side the avenue, by which those landing on the archaic port would reach the northern entrance of the Sanctuary. The great building northwest of the Lions housed the association of merchants, ship owners and bankers from Beirut. Further north is another quarter of the ancient town, partly excavated. The shops east of the Establishment of the Poseidoniasts and those on the Lake Agora are mainly bakeries and wine sellers.

The Lake House is a typical example of a Delian house of the late 2nd century BC. The rooms are arranged around an open square court, surrounded by porticos, which provides ventilation and illumination. Under the central part of the court there is always a large cistern in which rainwater from the roof was collected On the ground floor are the reception and dining rooms, the latrines, the kitchen, cellars, working rooms and rooms for the house slaves. On the upper floor are the private rooms of the owners and the women’s quarters. Close to the Lake House are the Granite Palaestra and the Lake Palaestra. Both palaestrae are comprised of a central court with cistern, around which were porticoes, exercise areas, exedras for discussions, changing rooms, vestiaries, baths, latrines etc.

Turning south and passing by the Sacred Lake, and the Italian Agora we reach the main road, north of the Sanctuary. Continuing this road eastwards one can visit the Archegesion, the Gymnasium, the Stadium, the Stadium Quarter and the Jewish Synagogue.

The Minoan Fountain is a square public well of the mid sixth century BC. Opposite the east end of the Portico of Antigonos is the monument dedicated by a certain Carystios, who as sponsor had won a prize for a theatrical performance (c. 300 BC) ca 300 BC to Dionysus: a phallus on a high base with relief representations of the god and his companions. In the 2nd century, beside the base, a small temple was built to the god in the form of a simple exedra, and a second phallus was placed symmetrically in it at the other end. Inside the exedra was the statue of a nude Dionysus seated indolently on a throne between two statues of actors in the costume of Old Silenus (in the Museum). North of the monument there are houses and shops and the road leading to the Museum. The findings from the excavations are kept in the Delos Museum, and include all or part of some 30,000 vessels, statuettes, small objects, 8,000 sculptures, and 3,000 inscriptions. Most of the sculptures, a few pottery and small objects are exhibited in the Museum’s eleven halls.

The House with the Dolphins and the House with the Masks are luxurious private houses with excellent mosaic floors. Passing the Xenon, an hotel with an enormous cistern and the Theater with the impressive cistern we enter the Theater Quarter, one of the oldest residential quarters of the ancient city. The House with the Trident is the wealthy residence of a ship owner, or merchant. In Dionysus House there was found an exceptional mosaic depicting the god riding a tiger (Museum). The headless statues of the owners welcome the visitor to the House of Cleopatra.

The narrow, paved road leads the visitor back to the port and the Agora of the Competaliasts, where the tour began. 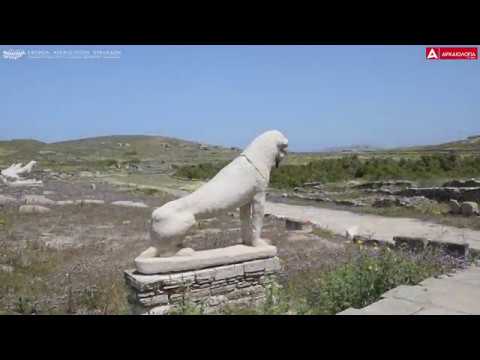