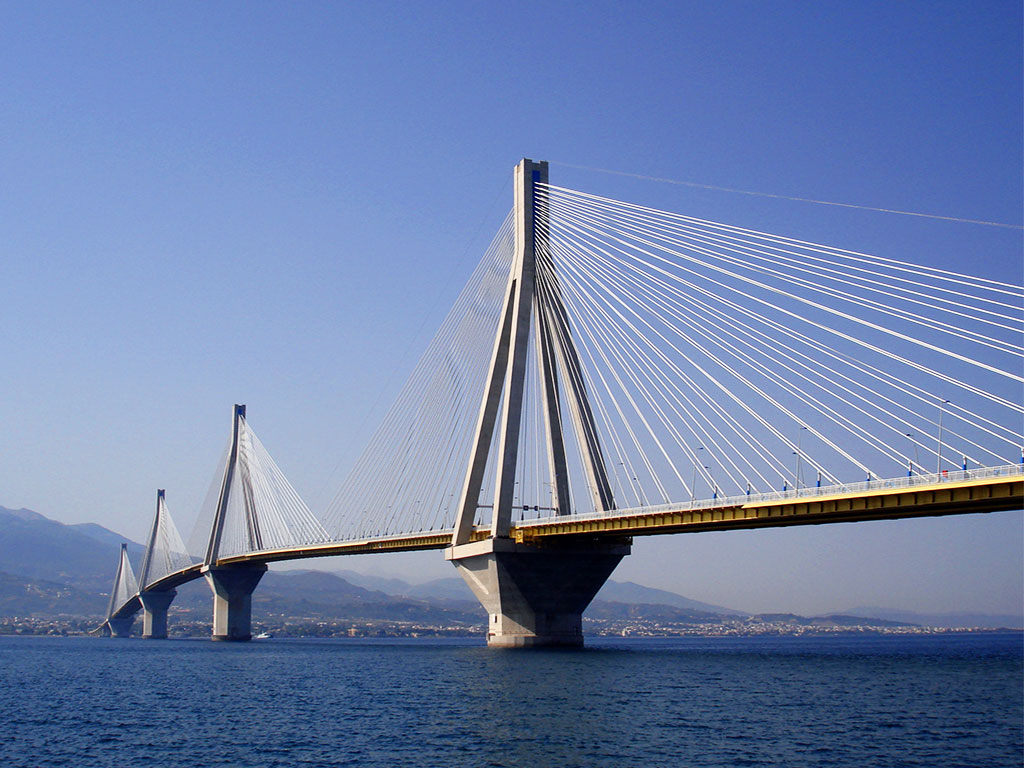 The first who suggested building a bridge in the current location was Charilaos Trikoupis, Prime Minister of Greece in the 19th century. He spoke in the parliament on March 29, 1889, for the need to bridge the Rion – Antirion straits. However, the wealth of Greece at the time didn't permit its construction.

A century later the Greek State decided to call for tenders for the construction of a fixed link. The invitation to tender in 1991 followed by the tender in December 1993 led on January 3, 1996, to the signing between the Hellenic Republic and GEFYRA of the Concession Agreement for the Design, Construction, Financing, Maintenance and Operation of the Rion – Antirion Bridge. The bridge was planned in the mid-1990s and was built by a French-Greek consortium led by the French group Vinci SA. On July 19, 1998, Prime Minister of Greece Costas Simitis cast the first stone for the Rion – Antirion Bridge, in presence of Mr. Costis Stephanopoulos, President of the Hellenic Republic. Site preparation and dredging began in July 1998, and construction of the massive supporting pylons in 2000. The total cost of the bridge was about €630 million, funded by Greek state funds, the consortium and loans by the European Investment Bank. The bridge was inaugurated on 7 August 2004 by the Minister of public works Mr. Georgios Souflias, a week before the opening of the 2004 Summer Olympics in Athens. Olympic torchbearers were the first to officially cross it.

On May 25, 2007, in a special ceremony, Karolos Papoulias, the President of the Hellenic Republic, named the bridge in question "Charilaos Trikoupis Bridge", and then proceeded to unveil a work of art in his form.

The Rion-Antirion Bridge is part of the European motorway network, located at the intersection of two major roads: the Athens - Korinthos - Patras motorway, the Ioannina - Antirion motorway which upon completion will form part of a modern motorway network linking the most important cities of Greece.

It is the longest cable-stayed multi-opening bridge in the world with its 2,252 meters continuous and fully suspended deck. The foundations lay on a seabed that reaches 65 meters of depth. This is a world record for a bridge as well as their diameter of 90 meters making of them the world’s largest bridge foundations. It has two vehicle lanes per direction, an emergency lane and a pedestrian walkway. It is designed and constructed to withstand large earthquakes and high wind speeds reminiscent of hurricanes. It has also been estimated that it can withstand a possible collision with a ship of a 180,000 tons displacement.