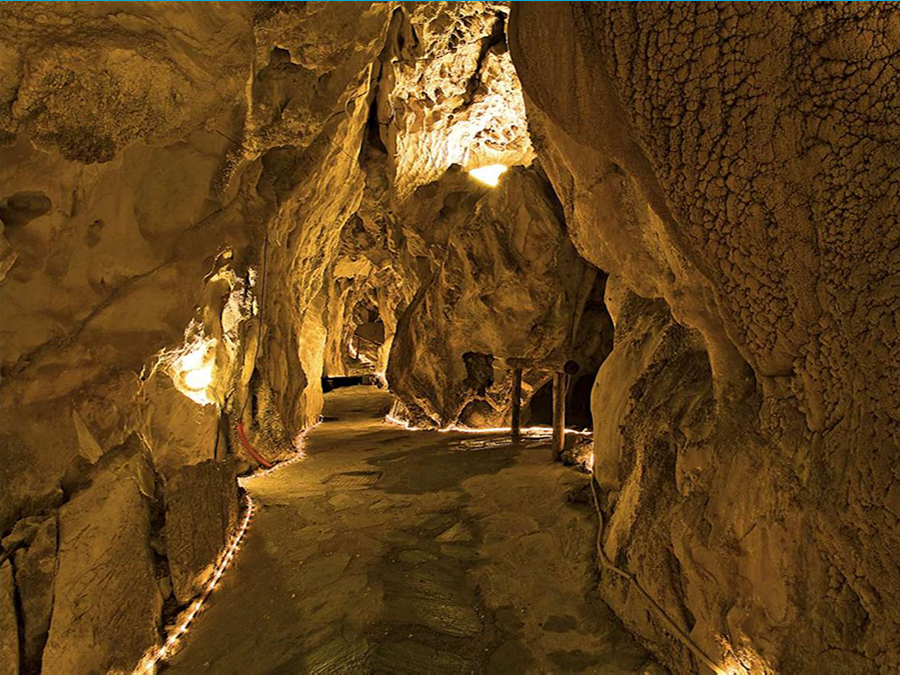 The Cave of Almopias, is the first and only speleological park in Greece. It is located at the foothills of Mountain Voras, near the village of Loutraki in the Municipality of Aridaia and within the facilities of the Thermal Baths.

About 15 caves have been recorded and researched since 1990. From these caves, Varathro has become touristy and can be visited, the Arkoudospilia has palaeontological interest, the Cave of the Antarton has archaeological interest, while the rest exhibit a varied, but less interesting.

The Almopia Cave is a special area of great interest in geology, palaeontology and archeology. Stone tools, arrows and other important finds have been discovered that give valuable information and testify that the area has been inhabited since the end of the Stone Age and the early Bronze Age. Palaeontologists have found that in these caves lived the ancestor of the current brown bear in terrifying proportions.

Among the most important findings of speleologists are the fossils of prehistoric animals, which are thousands or millions of years old. Among them are the relics of the cave bear (Ursus spelaeus) dating from the Pleistocene era, that is from 120,000 to 10,000 years ago.

Also, bones and teeth were found indicating the presence of the lion cave (Panther leo spelaea) and the cave hyacinth (Crocuta crocuta spelaea), the leopard (Panthera pardus), the fox (Vulpes vulpes), the meles ) of the lupus (Canis lupus) and the herbivorous ruminants Capra ibex, Bos primigenius, Cervus elaphus and many other microplasmic animals (rodents, bats, lagomorphs) of the Upper Pleistocene. The abundant palaeontological material of caves is valuable to scientists and is considered one of the richest in Greece.

The site has been refurbished so that it is easily accessible to visitors and has been used for scientific, research, educational and tourist purposes.

The findings from the excavations carried out in the cave are housed in the palaeontological exhibitions of the Natural History and Folklore Museum of Almopia in Loutra and the Municipal Museum of Natural History in Aridaia.
In addition to the caves in the area, there are thermal baths and the spectacular Vora gorge with impressive waterfalls.

Loutra of Loutraki of Aridea