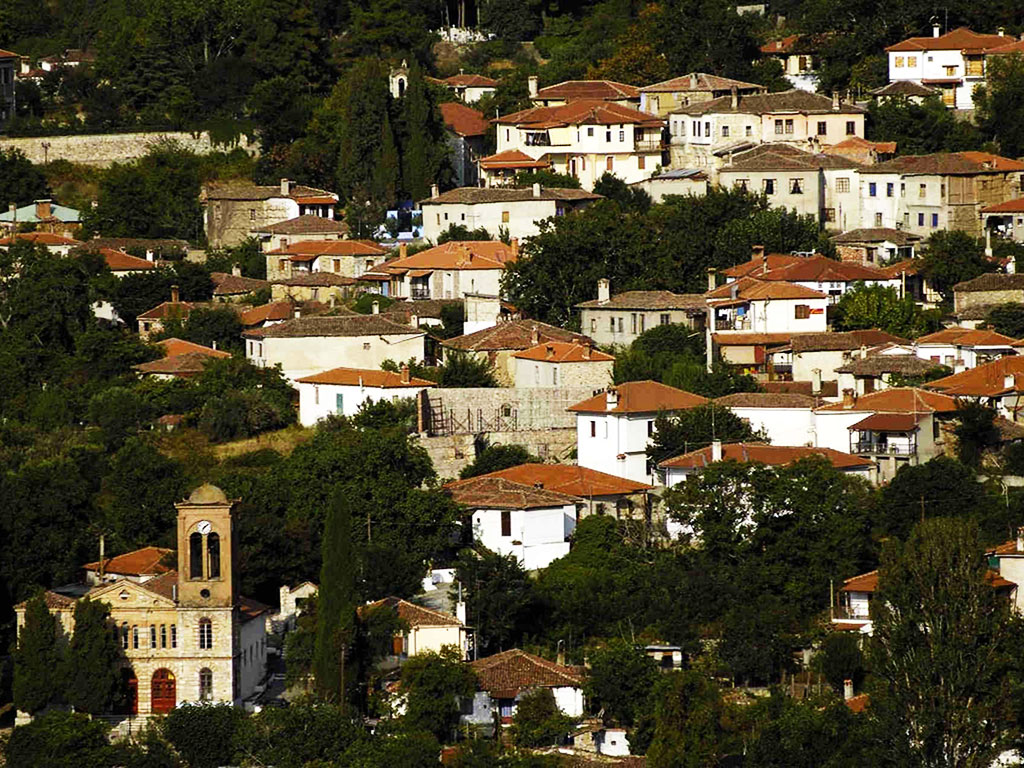 Ambelakia is a former municipality in the Larissa regional unit, Thessaly, Greece. Since the 2011 local government reform it is part of the municipality Tempi, of which it is a municipal unit and a municipal community. Ampelakia is also regarded as the historical seat of the municipality.
History
The traveler who will feel the need to visit the historical town of Ambelakia (nicknamed "The jewel of Thessaly"), has to go up the well made road that starts from the Tempe Valley. After just 5 kilometers is Ambelakia. As we get closer to the town the mansion of George Mavros (Schwartz) stands out. There is an unsure knowledge to exactly when and who established Ambelakia because there are no clear documents that attest to this subject. The inscriptions of churches and the recollections of their liturgical elements are the most reliable records about its foundation.
As far as concerns the name of the village, Ambelakia, some historians claim that it comes from the corruption of the word "Amfilakia" which means a village between two streams. But this is not right because the town is crossed by four streams and not two. The most possible version is that the name of the town comes from the fact that in the village and in the area around it there were a lot of vineyards ("Ambelia" in the Greek language). According to a rescued register of the vineyards in the year 1899, we know that there were 700 owners of vineyards who cultivated 1,100 acres (4.5 km2).
The most important cooperative organization in Greece is found in Ambelakia, Thessaly. The cooperative of merchants, craftsmen, farmers and laborers of production of the red yarns of Ambelakia flourished in the end of the 18th and the beginning of the 19th century. It is the first and most complete cooperative organization which was formed in Turkish-dominated Greece and developed like that.
Ambelakia was famous for dyeing with the famous plant, erythrodamon (rizari), whose roots gave that scarlet red color, which held the virtue of not fading because of the sun and time. The people of Ambelakia developed the art of dyeing and spinning in a great degree. They were provided the cotton they used mainly from the valley of Tempe where it was grown systematically in large quantities. When there was insufficiency and a lot of orders, they were provided from Macedonia, Thessaly, and Asia Minor. The people of Ambelakia spun the cotton in distaff, spindle and then they dyed it scarlet red by means of rizari.
Around 1750–1760 the first company, on a family basis, was formed. Within just a few years five companies functioned and employed about a thousand craftsmen. These were the companies of N. Pessios Arsenis Chatziprassas, Drossinos Chatzievos, G. Papaefthymios and George Schwartz. In 1778 the leaders of the companies took the initiative and decided the union of the whole companies in one Common Company under the name of " Common Company and Brotherhood of Ambelakia". That was because there had begun a harmful competition among the companies and because the orders had continually been increasing. During the existence of this cooperative, George Mavros (Schwartz) was the only and one chairman. He was the son of a significant merchant. He was born at Ambelakia in 1738 and died in Vienna in 1818 at the age of 80.
Unfortunately, for Ambelakia, the Modern Greek civilization and, generally, the universally financial, common life this famous co-operative did not last long it dissolved in 1812. The causes of this decline and fall are various but the main ones are the following:
1. Tottering of the European economy because of the Napoleonic wars and in particular the bankruptcy of Austrian state and the failure of Austrian banks where the people of Ampelakia had deposited most of their money.
2. The invention of aniline dyes, which had a better, cheaper effect on dyeing unfadingly and in various colors which gained preference throughout Europe.
3. The envy of Ali Pasha of Ioannina, who imposed unbearable taxation on Ampelakia and, also, forbid his obedients to buy their fezzes from there 'he himself brought his fezzes from Tynis.
4. The plague that appeared in 1812 and decimated the residents of Ampelakia "members of the co-operative" who left to settle in other places.
5. The in-fighting among the leaders of the community which led to the final dissolution of Ampelakia's co-operative.
Sights
1. The mansion of George Schwartz
2. The Folklore & Historical Museum
3. The Museum of the Period 1940-1949
4. The Church of Agios Georgios
View