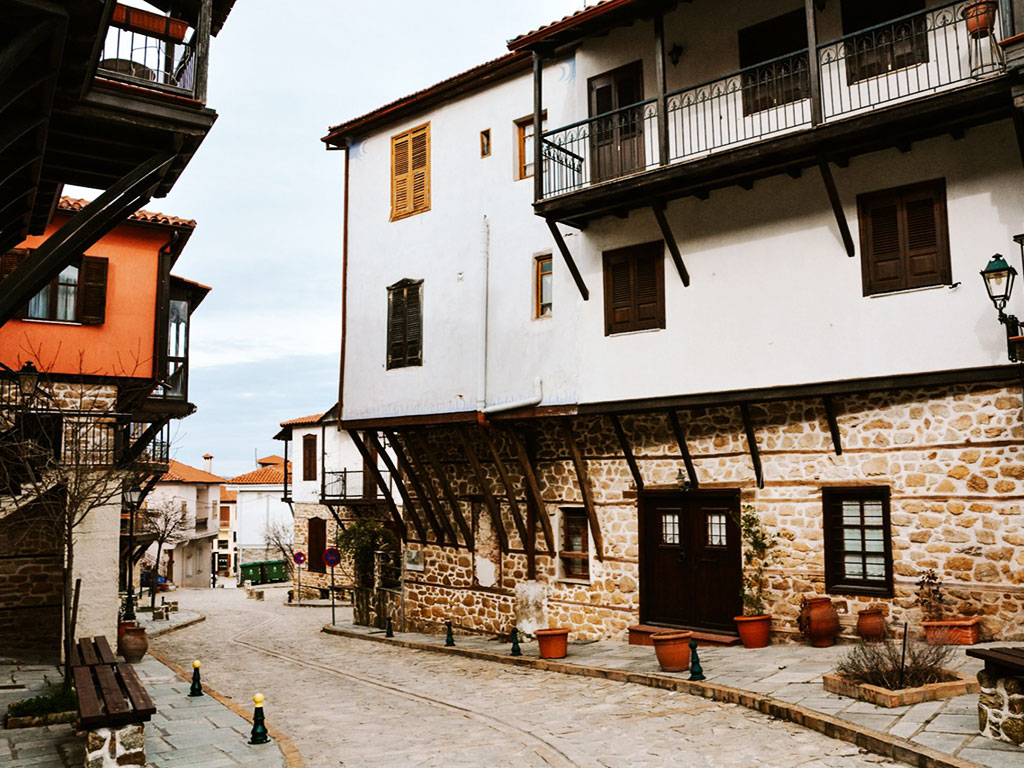 Arnea is a traditional small town, amphitheatrically built at an altitude of 600 meters, at the at the northern foot of Holomontas Mountain. It is located 70 km away from Thessaloniki and 38 km from Polygyros. It is one of the most picturesque villages of Northern Halkidiki and the seat of the Holy Metropolis of Ierissos, Mount Athos and Adrameri. The small picturesque town was developed during the 19th century and is one of the most beautiful mountainous villages in Macedonia. It is one of the 12 historic communities known collectively as the Mantemochoria (“Iron villages”), because at one time, they were obliged to provide workers for the area’s mines.

The town has preserved its traditional Macedonian architectural style with beautiful houses and buildings. Therefore, Arnea is characterized by the Ministry of Culture a "Historical place" and "Traditional Settlement". Walking along the narrow-cobbled streets is a unique experience. The town is surrounded by beautiful forests and there are many trails through the lush green mountains.  In the forest around Arnea you can also come across some beautiful waterfalls. This makes it the ideal destination for nature lovers who visit Arnea throughout the year. Nature enthusiasts can make their way to the 5th century ruins of the Neposi castle. The existing ancient wall of the castle stands tall at 4-5 meters and was built upon former structures dating back to 1500 BC.

There is no better way to get acquitted with Arnaia than to stroll through the nineteenth-century streets of the village and admire the mansions with the colored walls. Make your way to the top of the village by foot for panoramic views not only of the town but also of the whole Holomontas Mountain region. In the district of Gannoudena, south of the main square, you come across the famous Iatrou mansion operating as the Historical and the Folklore museum of Arnea and a bit further the Weaving museum. The Historic and Folklore museum is divided into three sections, displaying agricultural tools, woodworking tools and everyday household items.  The Weaving Museum of Arnaia is dedicated to Hariklia Dimitrakoudi, a local weaver and true master of the art.

Descending from the square on the main road, you come across the famous 1871 school, named “Urban school of Liarigkova”. It is the most well-built school of the 19th century in Halkidiki and houses the Town Hall since 1990. Its wall construction follows the technique used at that time in Mount Athos. Its tall bell tower, built in 1889 is the symbol of the town. Beside it, there is the church of St. Stephen and at the opposite side an old inn, nowadays operating as a guesthouse. This whole area, “Chorostasi”, used to be the center of the village. The temple of Agioi Anargyroi, built in 1919 and designed by Anastasios Orlandos is also remarkable. In 1924, a group of monks filled the temple with hagiographies. The impressive building of the public school with its huge courtyard is also very interesting. It is a characteristic sample of school architecture of the 1930’s.

Arnea is well known for the homemade honey from the Holomontas Mountain, its marmalades, the local tsipouro made with honey, its dairy products like goat cheese and yoghurt, trahana – Greek traditional noodles, and many more products. Throughout the year many festivals, exhibitions, concerts and other events take place.  The most noteworthy festivals are held on July 1st for Saint Anargiroi, July 26th for Saint Paraskevi and December 27th for Saint Stefanos. Just 15 minutes away is Stagira, the birthplace of philosopher Aristotle, a place worth visiting. From Arnea you can also escape into the woodlands of the wonderful Taxiarchis nature reserve for a hike or a picnic.

Arnea is an historical town. The first reference was made by the Greek historian Thucydides who wrote that the Spartan General Vrassidas departed from ‘Arne’ in the year 424 BC. And this was the only mention of this town so we don’t know exactly from when this area was inhabited. In the 15th century AD, a settlement was founded with the name Liarigovi. It was listed as one of the 12 villages that produced cast-iron.

In his book “A journey to Halkidiki in 1795”, French consul of Thessaloniki, E. Cousinery, gives sufficient information about the lifestyle conditions of the residents during the late 18th early 19th centuries. He specifically states that Arnaia was a large village with 400 houses and it was the capital of the Federation of Mademochoria, the 12 settlements managing the silver mines in the area.

During the Greek revolution in 1821 the Turks destroyed Liarigovi. The locals rebuilt the town but it stayed under Turkish occupation until 1912. In 1928 the name was changed from Liarigovi to Arnea.

Before 1821 and even after that, people were involved in weaving, beekeeping, timber and animal trade. In 1932, Arnea was the largest village in Northern Halkidiki, with 3.000 residents who were merchants, beekeepers, carpenters and handmade shoemakers, in fact, there were 50 guilds with craftsmen and master builders.

Sights
1. The Church of Agios Stefanos
2. The Church of Agii Anargyri
3. The Liarigov Urban School
4. The Construction of the Primary School
5. The Mansions of Alexandros, Mitsios and Iatros
6. The Historical - Folklore Museum
7. The Museum of Weaving
8. The Grove of Agia Paraskevi just outside the village
9. The Chapel of the prophet Elijah
10. The Park of Aristotle and the Ancient Stagira, birthplace of Aristotle
11. The Waterfalls of Barbara
12. The Towers
13. The Polygyros
14. The Mount Cholomontas
15. The Thermal Baths of New Apollonia
16. Mount Athos
View 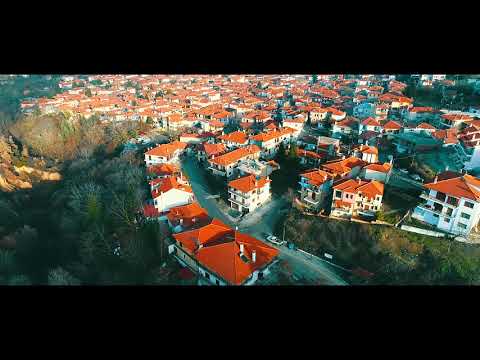