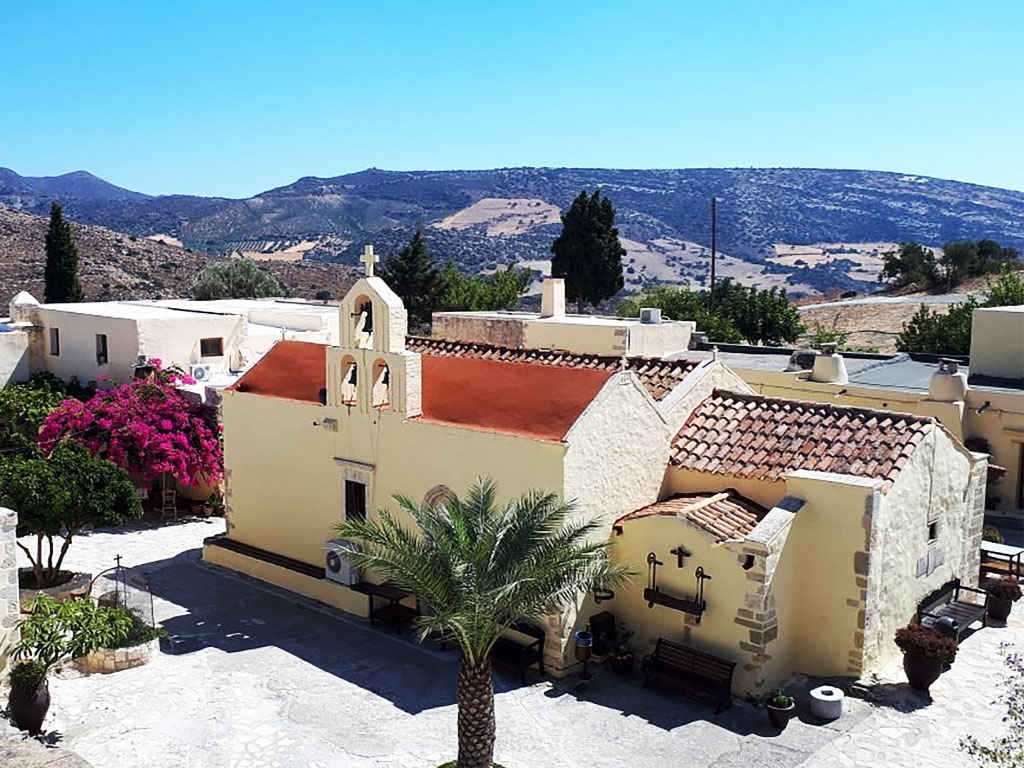 The Monastery of Odigitria is one of the most historic and old monasteries of Crete. It is built at an altitude of 250m, in a protected area of the Asterousia Mountains, near the sacred gorges of Agiofarago and Martsalo. The monastery owns a vast land including the two gorges. The area where it is situated, is also known as the “Mount Athos of Crete” after the famous monastic state of North Greece, as it has been for centuries the cradle of asceticism in Crete with many hermits to live there in the past. This strong religious tradition is also linked to the Apostle Paul, who is believed to have stopped in the area during his trip to Rome. This humble monastery is dedicated to the Assumption of Virgin Mary and to the Apostles Peter and Paul. There was a third church dedicated to St. Fanourios, but it has been demolished. The name of the monastery is probably related to an icon, painted by the Evangelist Luke, one of the most famous miraculous icons, in the era of the Byzantine Empire.

The monastery was founded in the 14th century and was built like a fortress. Part of its walls are still visible. In 1568 the monastery is renovated and gets its present form while in 1662 it became stavropegic (ruled directly by the Ecumenical Patriarch in Constantinople). It has always been a shelter for the rebels of Crete; therefore, it has suffered many disasters during its long history, mainly by the Turks and the Germans.

The central two-aisled church is surrounded by a number of buildings including the bakery, an oil press, a winepress, some cellars for the cheese, several warehouses, a well, a guest house, the abbot’s cell with the library, the monks cells and a few graves of the abbots. Moreover, it hosts a significant collection of Byzantine artifacts from the 15th and the 17th century such as precious relics and icons of the famous Cretan artist Angelo (15th century) and it owns some of the oldest chapels in the area which are decorated with remarkable murals. Among them, the chapels of Agia Kiriaki, Agios Antonios (St. Anthony), Panagia, Agios Andreas (St. Andrew) and St. John the Baptist. The monastery of Odigitria is celebrated each year, on the August, 15th.

Situated, off the beaten track, it does not attract as many tourists as other monasteries in Crete, however, it is an important highlight, as it is a place of great historical value. The monastery can be reached through the Siva village. It is 14 km away from Matala and 70 km from Heraklion.