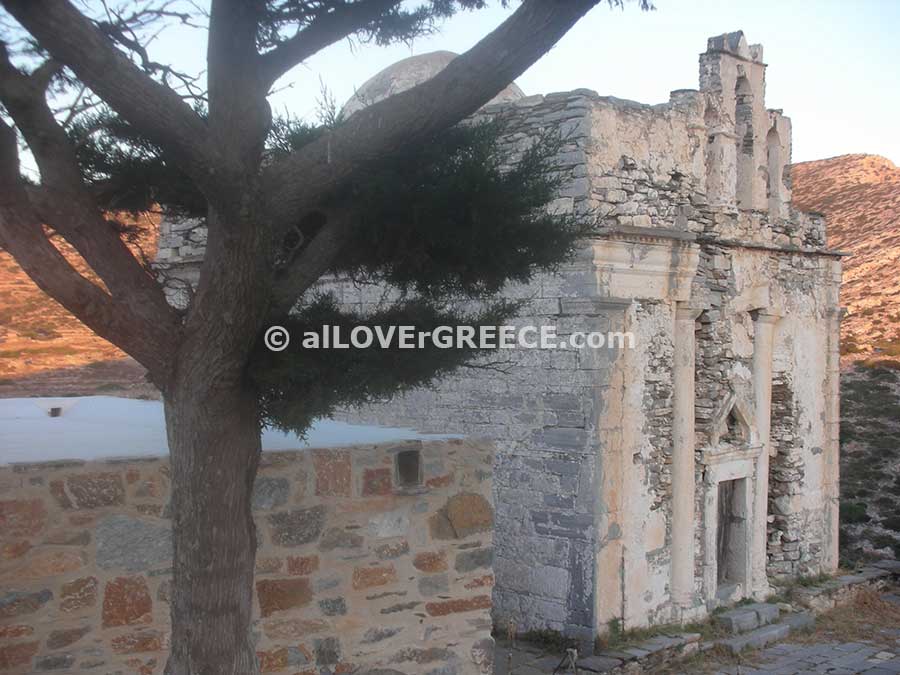 Episkopi is a very important monument of Sikinos and one of the most unusual buildings in the Cyclades. The original building was erected in the 3rd century AD and underwent several changes and repairs through the past 17 centuries. Initially was a temple-shaped Roman-era mausoleum of late antiquity, later a temple of Pythian Apollo and finally was converted into a Byzantine church and monastery in the 17th century. For the construction of the temple architectural elements of the ancient temple were used as building materials, a practice widespread for the time. The alterations carried out in the Middle Ages respected the ancient monument preserving almost intact its original architecture. The church operated nonstop until 1940. Now it hosts worshippers only on August 15, for the annual festival marking the Dormition of the Virgin. Episkopi reflects a great part of the island’s history and is the most famous, interesting and enigmatic monument of Sikinos. It is surrounded by byzantine chapels, cells and ancient ruins, amidst a luring rugged and dry landscape.

During restoration work on the monument in 2017, the unplundered grave of a prominent woman buried with her jewelry with an inscription bearing the Greek name Neiko was discovered in the vault of Episkopi. As stated in the Ministry of Culture’s announcement, the rich jewels worn by the woman proves that she was a prominent figure in the society of Sikinos. The findings included gold bracelets, rings, a necklace, a buckle with an embossed cameo along with glass and metal vases as well as organic fragments of the dead woman’s dress. The grave was buried in a concealed spot, possibly in an effort to protect it from looters. Archaeologists believe that probably the mausoleum was erected to house this woman’s tomb. Neiko’s fate as well as the entire mausoleum is a mystery for archaeologists as Sikinos is a poor island and a place of exile in ancient times. So, who had the money to erect such a monument? More research is needed to discover the secrets of Neiko and Episkopi. The restoration works continue and both archaeologists and conservators try to ensure and to highlight this unique monument. In the meantime, the site and the new archaeological museum in the former school expect to give the island an important tourist boost.

Episkopi lies to the southwest of Chora and there are two ways to get there: the paved road and the old donkey trail that runs parallel to the road. Both start at the bus stop outside Kastro. Walking to Episkopi takes about an hour but the hike is very scenic and highly recommended. Just remember to carry water with you as there aren’t any shops or taverns along the away.

Church of Agia Ekaterini of Sikinos

Church of the Virgin Mary of Pantochara

Church of Agios Savvas of Sikinos

The Presentation of the Blessed Virgin Mary

Church of Vergin Mary of Sykia