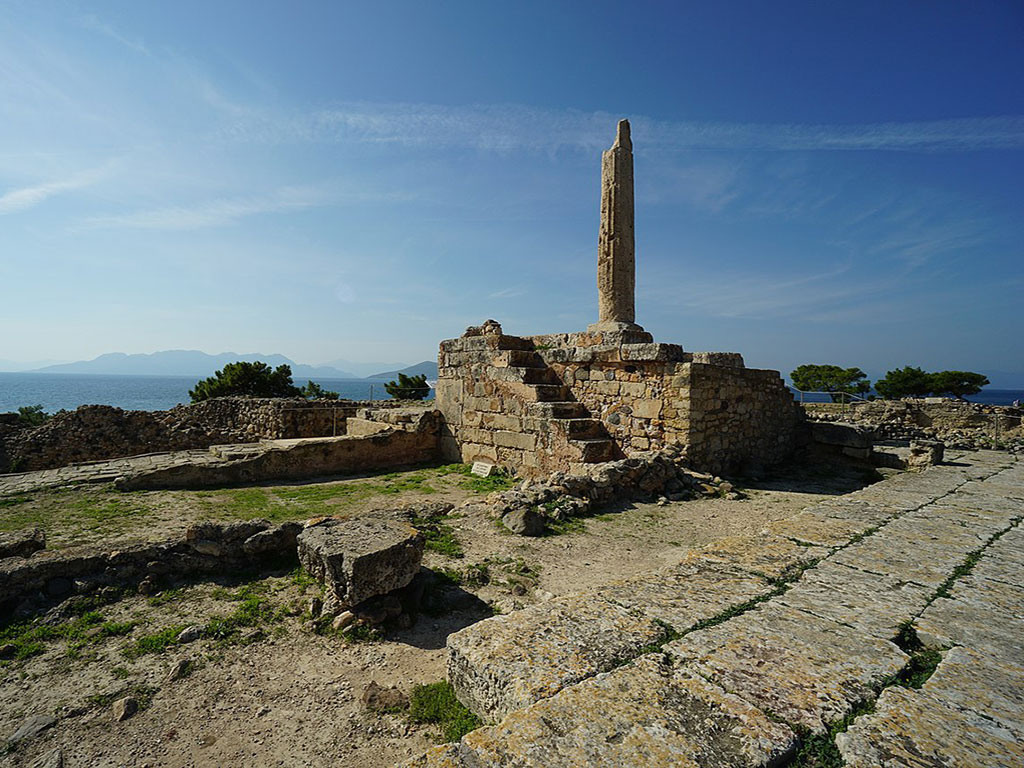 The Archaeological Site of Kolona

Although the temple of Aphaia is the most famous monument on the island of Aegina, the archaeological site of Kolona reveals the long history of the island over the centuries. The Hill of Kolona was the Acropolis of the island from prehistoric times (3000 BC) or even earlier up to the ancient times. The site is just 5 minutes’ walk from the port of Aegina and the ruins are located right next to the sea and to the ancient city’s two harbors. In one of those two port the Aegineans used to hide their triremes. It is well-known that Aegina was a great naval power in the 8th century. The archaeological site of Kolona is named after the single column (kolona in Greek), remnant of a Doric Temple, dedicated to Apollo. This column is about 8 m tall and was part of the temple's opisthodomos (rear section).

By the early Bronze Age, the settlement here had already grown but it flourished as a place of worship in the 7th century BC. The temple of Apollo was built in 520 BC of local limestone and featured 11 columns down its length and 6 columns along its width. Its construction was completed before that of the famous Parthenon in Athens, making it a monument of great historical significance. The temple pediments were made of Parian marble and depicted the legendary battles of the Amazons. The east pediment depicted a battle scene with Heracles and hero Telamon from Aegina against the Amazons. According to German archaeologist Gabriel Welter, the temple was built on top of a preexisting temple, probably dedicated to the god Poseidon. Its operation was halted in 354 A.D. by mandate of the emperor Constantine since it was considered paganistic.

Excavation began in the late 19th century and continued with greater intensity in the early 20th century, providing us useful information about the site. English architect Charles Robert Cockerell was the first to excavate the Hill of Kolona in 1811. A second excavation was carried out in 1903 by Estonian O.M. von Stackelberg and German archaeologist A. Furtwangler, followed by two more excavations in 1924 and 1966. Excavations are continuing even today since it is believed that there is much yet to be discovered.

Other ruins include the Tomb of Phokos, the shrine of Ajax, a small temple dedicated to Artemis, walls from different periods, theater, stadium and several tombs. It is believed that the theater was comparable to that of Epidaurus. Within the archaic tombs golden pieces of jewelry were found, which are today exhibited in the British Museum. There are also several Byzantine and Roman buildings scattered in the site, though it is very difficult for the visitors to decipher what era each ruin belongs to, despite the several marble markers.

The Tombs of Salaminomachon of Aegina