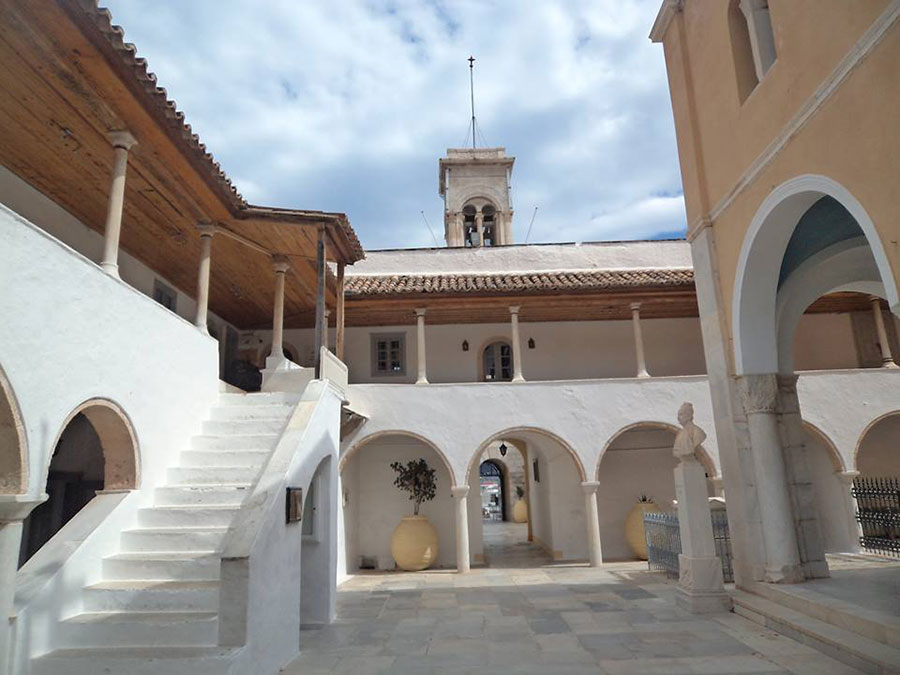 In the middle of the harbor is the Monastery of the Assumption of the Virgin , the " Monastery ", as it is called the Metropolis of Hydra, built in the middle of the 17th century and considered as one of the oldest monasteries of Hydra. The Ecclesiastical and Byzantine Museum "Aghios Makarios Notaras" is housed on the west side of the building's premises, in the old cell space, and has been operating since 1999. It is a small Ecclesiastical and Byzantine Museum in which it exhibits vestments, heirlooms, tributes and icons mainly from the 18th century. The Temple was destroyed by an earthquake in 1750, but it was rebuilt a few years later with designs of Venetian and Genovese architects. It used to be a Monastery. It is a small Ecclesiastical and Byzantine Museum in which the relics of the monastery, vestments, tributes, sacred vessels, musical manuscripts, Turkish trumpets and sacred icons, especially of the 18th century, are exhibited in special showcases. Among them is the icon of the Virgin Mary " Rhodes Amaranto ", which dates back to 1774. There are also relics of individuals such as portable images of Archim. the personal items of the pastor of Hydra the Hierarch, the Metropolitan of Paranaxia, son of Epiphanios, donated by the niece of Georgios E., the personal objects of the late Metropolitan Hydra of the Procanus of Karamanos, offered by Mr. Eleftheria Soulias and Maria Kourousopoulou, Kalafatis, as an elaborate Cross of Blessing, donated by Anna Dima Perkiza.