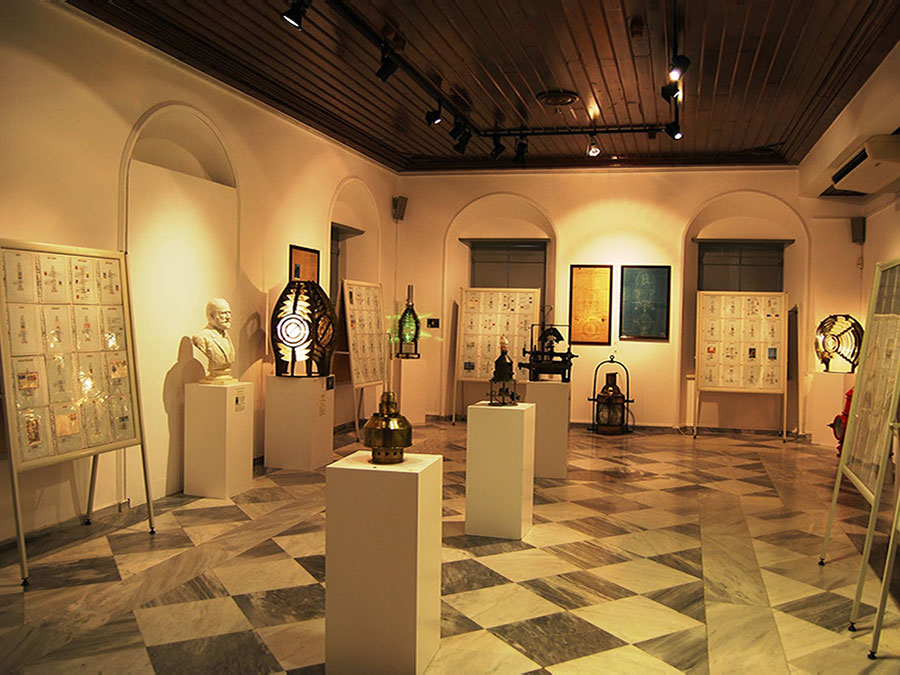 In 1918, the Historical Archive - Hydra Museum was established in a building located near the Port Authority, on the east side of the Port and donated to the then community of Hydra the shipowner and benefactor of Ghika N. Koulouras. The Anthony D. Lignos , physician and Hydra Mayor for 40 consecutive years, undertakes with tireless zeal the task of sorting and transcribing of Hydra community archive material (1708-1865), who had himself discovered in cells-stores I. Temple of the Assumption of Hydra. With this work he laid the foundations for the creation of a Museum and Library on the island. In 1952, Gikas Koulouras donated the building to the state and since then the Historical Archive - Hydra Museum operates as a Public Service under the YPEPTH and is scientifically supervised by the General Archives of the State. In 1972 the original building was demolished for structural reasons and in its place the present building is being built with the careless care of the then Metropolitan of Hydra, Spetses and Aeginas. Jerome. The new building was inaugurated in July 1996 and houses the restored Archaeological Museum Service and its Library in its imposing premises. Since then it has been running daily for historical researchers and visitors to the island. The Archaeological Department, the Museum Department and the Library operate. Archive section: The purpose of the Archaeological Section is to locate, collect, catalog, maintain an index, and finally publish all sorts of archival material related to Hydra, its local history, tradition and culture. This Hydra center of historical documentation enters archaeological material from the public services of the island as well as archives of Bodies and individuals, which are important sources of historical research of the place and historically highlight the leading role of Hydra especially during the 18th - 19th century . A large section of archive material concerns the archive of the Hydra community (1708 - 1865). There are about eighteen thousand primary documents, manuscripts, codes and inventories that outline the pre-revolutionary, revolutionary and post-revolutionary times of Greek history. There are educational, administrative, ecclesiastical, collec- tive, etc. files. starting from the middle of the 19th century, often reaching up to our days. Museum section: The museum area is located on the ground floor and on the first floor. On the ground floor of the Museum are exhibited heirlooms of the Balkan wars and the First and Second World War . In the anteroom there are hydrated costumes, acropolis and acropolis from the ships of the Struggle, important small arts of the 18th - 19th century, guns of water fighters, beautiful engravings, nautical maps, the Riga Feraios Charter, etc. The silver lekythos with the embalmed heart of Andreas Miaoulis is also kept in this area. A magnificent Historic Art Gallery with great Greek and foreign painters, especially oil paintings and watercolor paintings depicting ships of the struggle, has been created in the halls of the floor and at the same time there are memories and heirlooms from the time of the Revolution. On the walls of the staircase leading to the floor are portraits of Hydra fighters, crafted by well-known painters such as Panagiotis Tetsis and Dimosthenis Kokkinidis. The visitor of the museum, moving in the atmosphere of the area, has the opportunity to revive the entire heroic past of Hydra within it. Library: It is housed on the ground floor of the building and includes 4,000 volumes of books, mainly old precious publications, many of which date back to the early 18th century , as well as the Historical Archives with manuscripts, documents and codes of the 18th and 19th centuries and various archives. Its content is continuously enriched with new publications, mainly historical and archival but also literary, magazines, newspapers etc. The Archives-Museum hosts 18,000 documents from the early 18th to the beginning of the 19th century, 12,000 titles of books, historical and literary content, as well as dozens of surprising exhibits, such as the original Charter of Rigas Feraios.