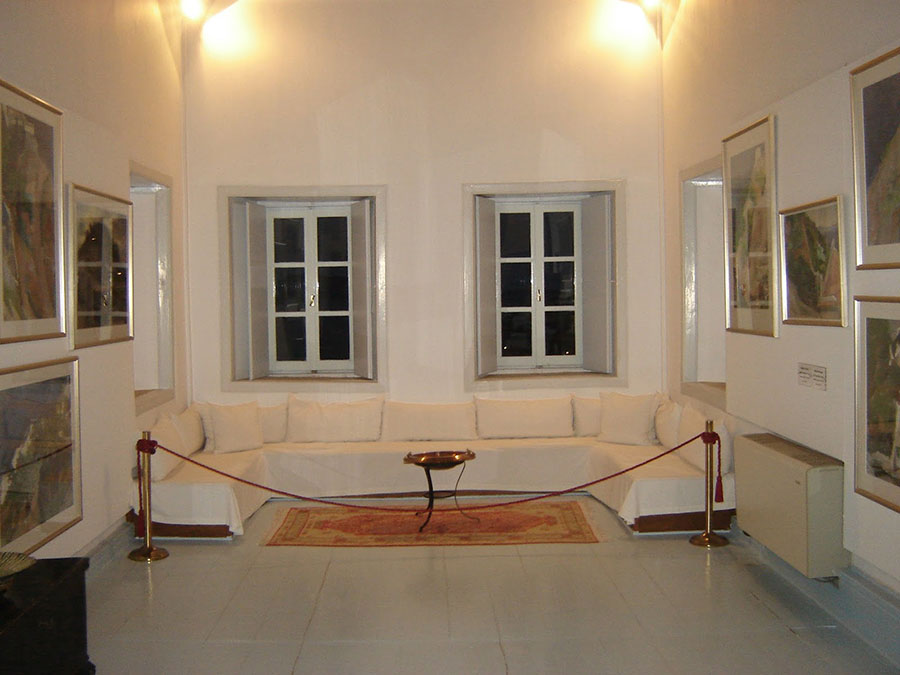 The house of Hydra, the prestigious Lazaros Kountourioti , a great shipowner of Hydra, who played an important political role in the struggle and during the period of independence, dominates the western side of the port of Hydra and is a typical example of a Hydra mansion of traditional Hydra architecture. It was built at the end of the 18th century, at the time of the economic boom and naval supremacy of Hydra. In the mansion of this important political figure of modern Greece, important consultations took place on the issues of the Revolution of 1821, and important personalities of the time were hosted, both Greeks and foreigners. In 1979 the house was transferred to the Historical and Ethnological Society of Greece, donated by his great-grandson Pantelis Kountourioti and his wife Frosso , in order to become a museum. After many years of restoration and maintenance work since the summer of 2001, the historic home of Lazaros Kountourioti is open to the public and serves as an annex to the National Historical Museum . The Company, faithful to the desire of the donors and recognizing the value of the mansion Kountourioti within the hydratic residential and historical peculiarity, has kept all its historical and architectural details unchanged and has created visitors' exhibition spaces. After the restoration work, the annex of the National Historical Museum has been formed on three levels . On the ground floor, in the old cellars of the mansion that have been properly shaped, permanent paintings of two distinguished painters in Greece and abroad, Pericles Byzantios (1893-1972) and his son Constantine Byzantios(1924-2007), who were connected with close family ties with the Kountourioti family. Pericles Byzantium spent much of his life in Hydra as director of the School of Fine Arts. He turned to Hydra and often immortalized it in his works. The paintings are donated to the "Historical and Ethnological Society of Greece" by M. Liakopoulou - Byzantium and his son Alexander. The floor , formerly used as the main living space, is presented as the last descendant of the family and donor Pantelis Kountourioti, with old furniture, utensils, mirrors, dinner sets, paintings, family portraits, personal belongings and family heirlooms Kountouriotis. Furnished from the East and the West, harmoniously blended with local elements. Inspirational sofas and duvets, adjoining European consoles and buffets, wooden chests and folding wardrobes, bangles and brass, golden mirrors, English and Italian dinner sets, nautical souvenirs, paintings and photographic family portraits, engravings of the Independence struggle, make up a peculiar but and a particularly charming ensemble. On the upper floor there are exhibited historical and folklore collections of the National Historical Museum with representative works of Modern Greek art of the 18th and 19th centuries, mainly referring to the island's traditional art. Traditional island costumes of the three most important naval islands - Hydra, Spetses and Psars, Skopelos, Skyros, Skiathos, Astypalea, Trikeri, Corfu, Chios, Kastelorizo ​​and other Greek regions from mainland Greece - Ioannina, Veria, Kastoria. Jewelery, embroidery, textiles, ceramics, wood carvings or painted, ornamental and other utilitarian objects are presented in the large rooms on the floor reflecting the social and economic conditions of that era, as well as the aesthetic trends resulting, of course, from the influence of the Western European way of life . Visitors' attention attracts in the first room the costume of Lazarina (Stamatanas) Kountourioti , a typical sample of hydrated costume with full-bodied pleated dark green dress and silk jacket, the costume of Hydra by Eleni Dim. Voulgaris , granddaughter of L. Kountourioti, the costume of Spetses by Maria Bostassa , as well as the costume of Kalliopi Kotzia . In the same place are presented the famous Hydra scarves, creations of female cultivation and sensitivity, dominated by that of Kiriakoula Kriezi , Honorable Lady of Queen Amalia. In the next room, a variety of jewelery are presented - buckles, bracelets, earrings, backpack jewelry, pins, and traditional costumes of particular interest from Macedonia, Thrace, Asia Minor, North Epirus and Attica. Visitors' interest is also attracted by the large hall on the upper floor and especially the central showcase of the hall, which displays outstanding silverware samples, crafted with the traditional techniques. Wrought, molded, embossed, engraved, perforated, filigree, enamel and savati. The colorful ceramic dishes and galleries placed on the wall along with the trefoil-shaped marmots and canvases from various parts of Hellenism give another aspect of the island tradition by referring to the decoration of the island's home. There are also two painted wood carvings from the interior decoration of the mansion "bey" of Hydra Georgiou Voulgaris, which are excellent examples of woodcarving. Modern Greek weaving is represented in the exhibition by a wooden carved loom from Crete along with various tools for wool processing such as rockets, shutters, etc. and exquisite samples of weavers with colorful embroidery on the loom for decorating the house and dressing the family.