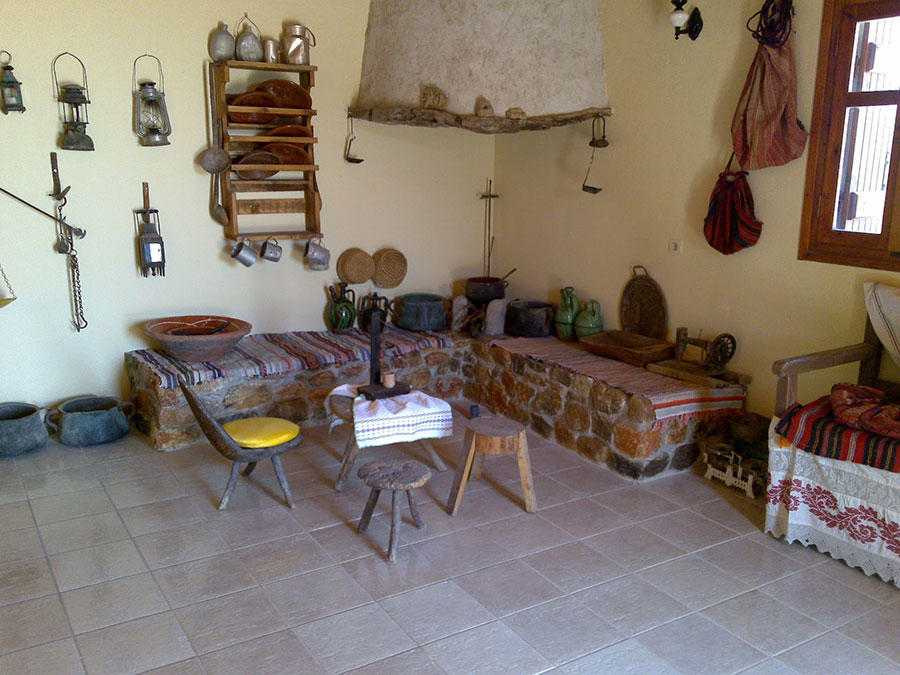 The Folklore Museum of Skopelos, where the material testimonies of the place are found, was established in order to promote the cultural wealth of the island and to create a spiritual core worthy of its traditions and history. The building where the Folklore Museum is housed today was donated in 1991 by the Nicolaides family to the Municipality of Skopelos. the old building was built in 1795 and was maintained until 1963 when during the great earthquakes at Skopelos the first and the second floor collapsed. In 1971 the building was redeveloped on the basis of the old building's designs and took its shape today, retaining all the characteristic elements inside and outside the traditional style of the settlement that you consider legally preserved. The Folklore Museum of Skopelos opened its doors to the audience in August 1992, thus giving life again with its activity in the old mansion of the previous century. With great excitement grandmothers opened the chests and generously offered all that treasure that was also the material of collections in the Museum, where each item found its rightful place. Thus, a mansion of the last century was built, although although the absence of housewives is noticeable, it has the impression that somewhere there are and will soon emerge. The collections of the Skopelos Museum consist of a number of traditional handmade embroidery embedded in the living room, the fireplace or the bridal bedroom where all the brides of the bride look intact from time to time. The ground floor is covered by the living room and the fireplace. The sofa is embellished with exquisite embroidery. The wood-carved furniture, works of the traditional craftsman of the island, complement the splendor of the island. The bridal bedroom next to it and the other exhibits of the Museum The bridal bedroom with the baby crib and the bespoke beams are located on the second floor of the mansion. The other rooms are covered by the guest room with sofas of that time, made from part of the embroidery of their bridal traditional costume. In addition to the individual objects, it was also the concern that the works of popular laboratories on the island were to be promoted. The material gathered is enough and represents the folk and traditional craftsmen of the island who in their turn created the history of the folk art of the island and we must confess that there are not many of those whose families came and made this great offer, testimony to their place. An excellent collection of ceramics, knives, small faithful copies of boats, paintings and other works are fascinating with their construction and the passion with which they were made. The basement of the Folklore Museum is covered by a small collection of agricultural tools and items of everyday household use. The sofa and beside him a sample of the famous Skopelian costume, which was the costume that was worn by the girl holding the Greek flag at the Olympic Games in Atlanta. The Folklore Museum of Skopelos is a living organism, a heart that beats the inhabitants of the island, who, with their faith in it and their unwavering support, try to keep their traditions intact and pass them on to the next generations. The Folklore Museum organizes many events and various educational programs. The branch of the Lyceum of Greek Women completes this in turn the cycle of tradition with the preservation of the traditional countries. The Folklore Museum has also begun an effort to collect ethnographic and folklore information about the island of Skopelos, such as old photographs and much more. The role of the Folklore Museum of Skopelos aims to represent the history of the island by participating in its way in education, linking the past with the present, while at the same time contributing to the national consciousness and preservation of the cultural identity of our country by exuding that delicate aroma of romance and still images that have been permanently lost.

House of Paul Nirvana of Skopelos