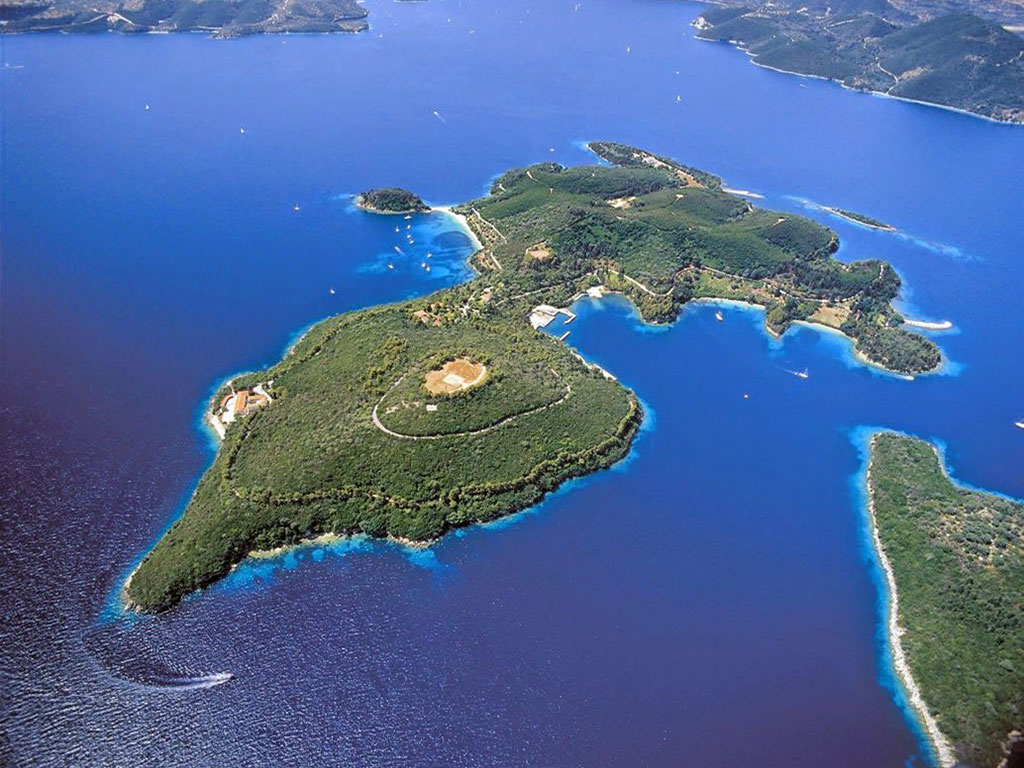 Scorpios is a private island in the Ionian Sea. It is located between the east coast of Lefkada and the west coast of Etoloakarnania, three nautical miles from the cosmopolitan Nidri. Administratively it is part of the municipality of Meganisi in Lefkada regional unit. Scorpios is fully covered with trees and bushes and has some sandy beaches.

The islet was bought by the famous billionaire Aristotle Onassis in 1963 for the relatively modest sum of 3.5 million drachmas, the equivalent of about $14,000 today. In order to turn it into a private refuge, Onassis imported 200 different types of trees, bought a mountain on another island for the water supply, renovated the house that already existed on the islet, built some more residences, a helicopter landing pad and a boat quay to accommodate his beloved yacht, the Christina. Skorpios hosted numerous famous parties and events. The most memorable was the marriage of Aristotle Onassis with the former US First Lady Jacqueline Kennedy on October 20, 1968. Upon Christina's death, the small island passed to her daughter, Athena Russell-Onassis who was the only surviving heir. Athena leased the island to the Russian magnate Dmitry Rybolovlev in 2013. Rybolovlev paid the mythical amount of 100 million euros and Scorpios was the birthday present to his daughter, Ekaterina. Due to the fact that Aristotle Onassis stated in his will that Scorpios could not be sold to anyone who did not belong to the family, Athena was forced to hire the islet to Rimbolovlev on a long-term lease. Aristotle Onassis, his son Alexander and his daughter Christina are all buried on the island.

The new owners have some business plans to make Skorpios open to public by building a 5-star hotel, villas, a farm and vineyard, a spa, a sports complex and a larger harbor to accommodate more yachts. Rybolovlev’s plans are to transform the island into a destination for the international jet set and in particular “ultra-high-net-worth individuals”.