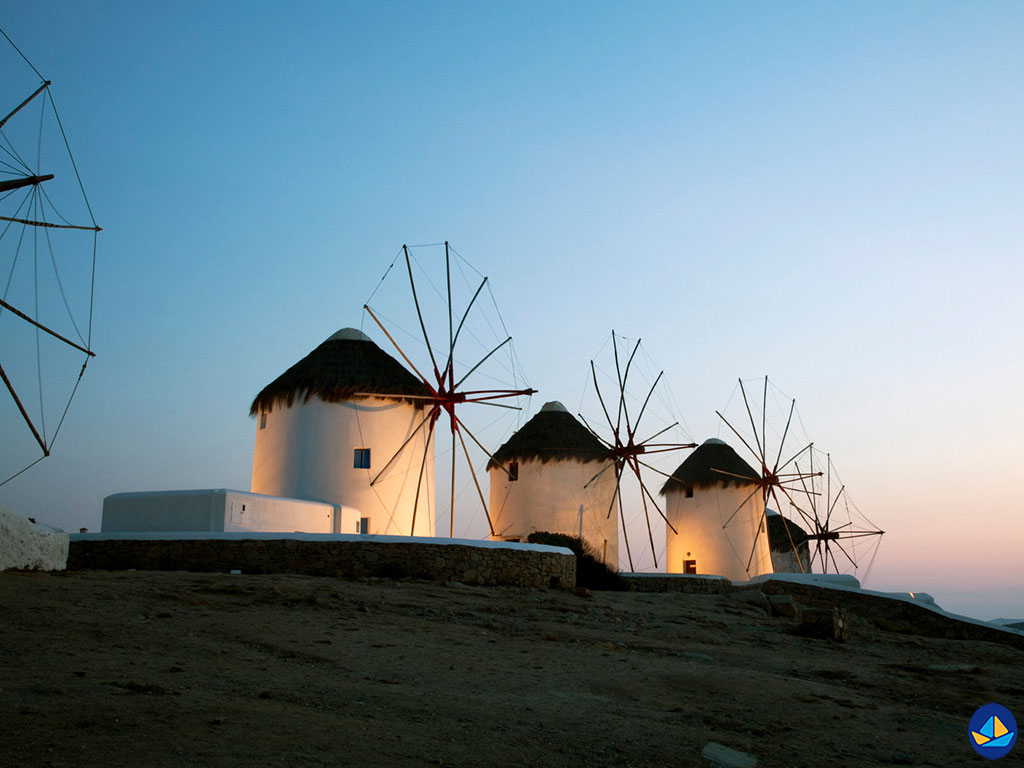 The famous Mykonos windmills also known as “Kato Miloi” or “Lower Windmills”, are situated on a small hill overlooking the sea, southeast of Chora between scenic Alefkandra and the quarter of Niochori. They are one of the most photographed spots on the island and Mykonos’ most recognized landmark. The whitewashed mills, built in a row have a similar architecture as they all are heavy three-story constructions made of stone with a spherical shape, small windows and a conical wooden roof. They were ten in total, but today only seven are preserved. They were functional until the first decades of the 20th century, grinding with the force of the north winds the grain, produced on the island.
Most of the windmills in Mykonos were constructed by the Venetians at some point during the 16th-century,  At the end of the 18th century until the middle of the 19th century, 28 windmills were operating in Mykonos. They were owned by mostly wealthy families such as wealthy landowners, merchants and sailors as well as monasteries such as Panagia Tourliani. Cyclades are one of the areas with the most winds in the Mediterranean and this is the main reason for the existence of so many mills. At that time much of the industry on Mykonos was focused on grain production, specifically wheat, and flour was one of the main ingredient in the diet of the population.  The mills  contributed to the economic prosperity of the island which, being a necessary station for the passing sailboats, supplied them with rusk.
Through the progress of technology they lost their financial value but they marked as a popular monument of the Cyclades and their photos traveled all around the world. As for the windmills of Mykonos they became one of the most popular attractions of the island. Today the Mill of Geronymos (private) is the best preserved mill. It was functional until the 60's and it still retains most of its equipment. Nowadays, it hosts the Agricultural Museum, part of the Folklore Museum of Mykonos. Many of the mills have now been renovated and turned into houses or rental accommodation.