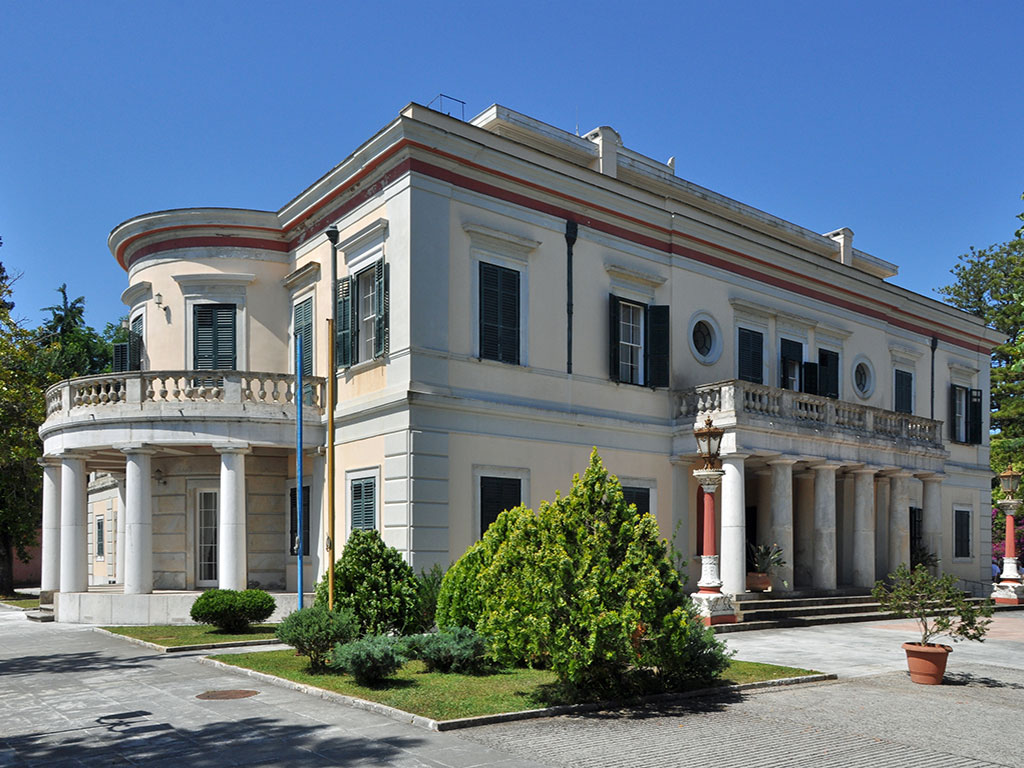 The Mon Repos palace estate is situated on the east coast of the Greek island of Corfu. In the past century was a place of rest for the Greek Royals but now is property of the Municipality of Corfu and since 2001 houses Paleopolis Museum with interesting archaeological finds, historical documents, prints, authentic furniture and various other objects, all depicting the history and brilliant past of Corfu.

The former palace was built in 1831 by Sir Frederick Adam, the British High Commissioner of the Ionian islands for his second spouse, Diamantina “Nina” Palatianou. The construction began in 1928 and was based on the designs of the English architect, Whitmore. Soon afterwards, the couple had to vacate the villa when Maitland was sent to serve in India. Empress Elisabeth of Austria (better known as Sissi) stayed in the palace in 1863. Here she fell in love with the island, where she later built the Achilleion Palace. The villa was the birthplace of Prince Philip of Greece, who went on to marry Britain's Princess Elizabeth (now Queen of England). When the Ionian Islands united with the rest of Greece (1864), Mon Repo was granted to King George I who renamed the palace Mon Repos (French for “My Rest”). The Royal family used the villa as a summer residence up to the end of monarchy in 1967. After some years of decay, the villa was restored in the 1990s and is now a wonderful place to visit.

The estate covers an area of 260 acres and includes botanical gardens and two buildings. Both buildings are a typical example of early 19th century neoclassical architecture. The garden is full of rare plants and trees., mostly originating in the overseas dominions of the British Empire which thanks to the climate of Corfu were preserved and survived until today. The huge trees provide shade from the sun and the garden is a great place for a walk on a hot summer day. At the back of the park is a small beach with a pier built into the sea from where you can dive into the clear sea.

Excavations next to the entry revealed the remains of Paleopolis which is the ancient city of the island. Spread around the Mon Repos area, are the ruins of the temples of Hera, Artemis and Apollo. Mon Repos is located just 3 km from Corfu Town and it takes almost half an hour to get there on foot or you can catch the bus from Spianada.