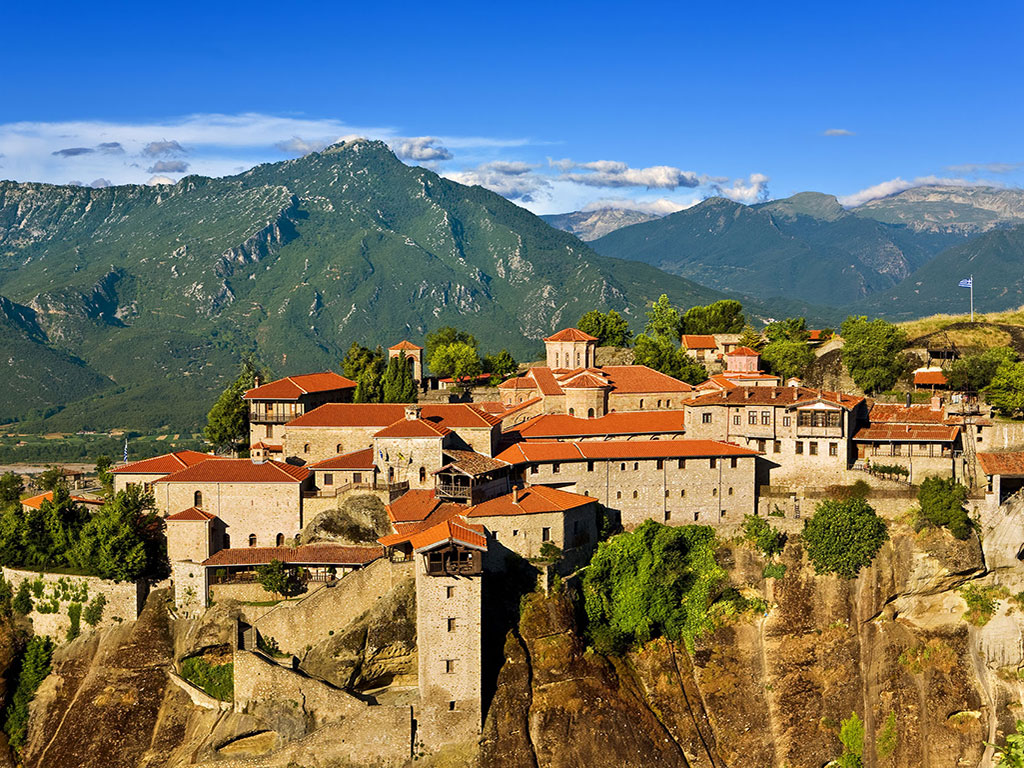 The monastery, built on an imposing rock, is the oldest, the biggest and the most important among the monasteries of Meteora which are preserved today. It was founded little before the mid-14th century (around 1340) by a scholar monk of Mount Athos, Saint Athanasios Meteorites. An important person was also his successor and second founder of the monastery, monk Saint Iosaph (one-time king Ioannis Uresis Paleologos).

In its prime (in the mid-16th century), the monastery had about 300 monks and therefore, it was a spiritual hive. Then, the number of monks decreased and nowadays, there are only 3 monks.

The monastery flourished particularly in the mid-16th century. Thanks to imperial and royal donations it became the most powerful of all the monasteries of Meteora. In 1544/1545, today’s magnificent nave and narthex of the imposing katholikon were built. Later, a refectory, a kitchen, a hospital-home for the aged, a tower, small chapels and joined ladders were built.

The monastery katholikon is dedicated to the Transfiguration of Christ and it is the result of a combination of 3 construction stages. Firstly, the present katholikon sanctuary was in fact the first church of the monastery, built by Saint Athanasios Meteorites in the mid-14th century. Later, in 1387/1388 the second founder of the monastery, Saint Iosaph expanded and rebuilt it. Finally, in 1544/1545, the magnificent nave and the narthex of the present imposing monastery katholikon were erected.

Among the buildings of the monasteries (apart from the katholikon), are also distinguished the library, the hermitage, the kitchen (hestia), the  old refectory (1557), the hospital-home for the aged (1572), the chapel of Saint John the Baptist (1682), the Saints Constantine and Helen Chapel (1789), the chapel of Virgin Mary and finally, the Saint Nectarius chapel.