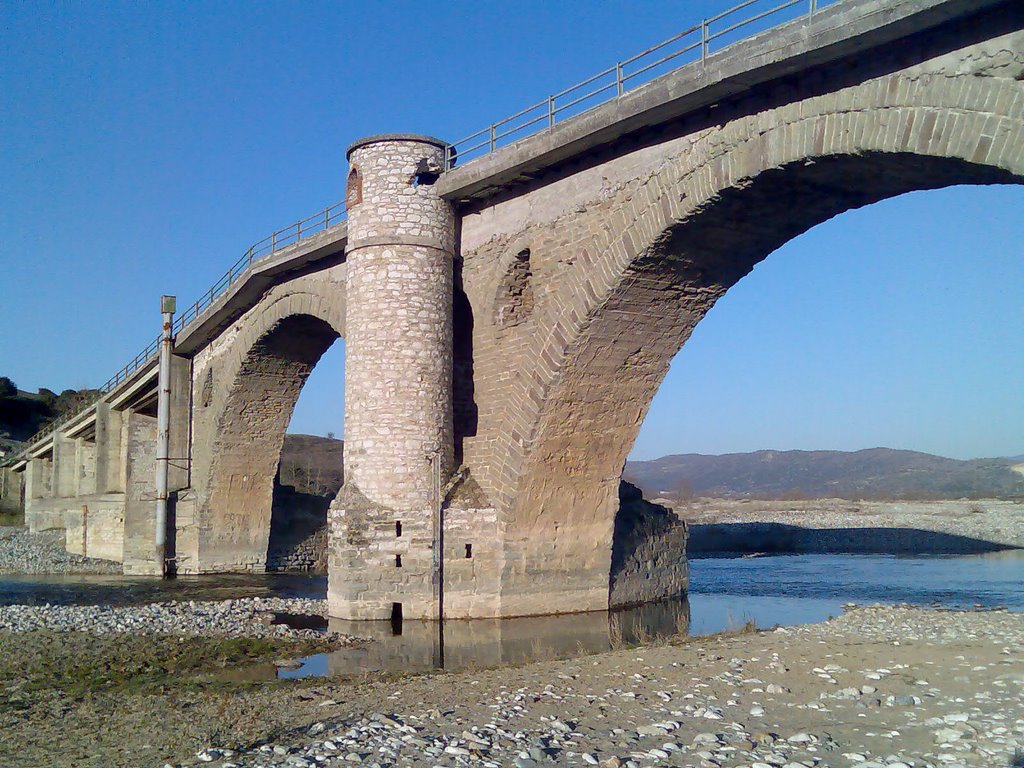 The Sarakinas Bridge is located about 1500 m after the settlement of Sarakinas in Trikala and still serves the provincial network, Sarakinas - Diavas. It bridges the river Pinios (Salambria) and is 21 km away from Trikala. It used to serve the transport to the villages of the area of ​​Aspropotamos and Epirus.
The grandeur of the multi-arched bridge combined with the adjacent large rock are imposing on the visitor. The bridge is also called "Bridge of Petra" by the Vlachs of the area of ​​Aspropotamos.
The bridge was built in the 16th century (1520) by the Metropolitan of Larissa, Vissarion II. In its original form, the bridge had six arches, the third larger than the left (eastern) bank, below which passes the deepest riverbed of the Pinios River. Agios Vissarion, Metropolitan of Larissa (then based in Trikala) was the most important "bridge builder" of Thessaly. With sponsorships and fundraising, which he did among the faithful in the wider area, he was inspired by his own initiative and supervision, he built many public works such as the bridge of Korakos (1514-15), in Aspropotamos (Acheloos), the bridge of Porta (1514) in Portaikos, the bridge of Sarakina (1520) and others.
The four semicircular arches survive today from the old bridge, which have the following characteristics starting from the left bank:
1. The small arch that has been loosened in parts, has an opening of 7.50 m, a height of 3.70 m and a molding thickness of 0.50 m.
2. The second arc is 16.70 m wide, 9.70 m high and 0.60 m thick.
3. The third arch, which is also the largest, has an opening of 19.70 m. Height of 9.70 m. And a wall thickness of 0.80 m.
4. The fourth arch on the right bank, has an opening of 8.50 m, a height of 3.50 m and a molding thickness of 0.50 m.
In 1970, the wooden structure was replaced with a concrete body and the deck was widened by 2 m. For the addition of sidewalks but also for the passage of wheeled vehicles. The width of the body and the deck, on the old bridge, is 3.20 m, while with the widening it reaches 5.20 m. The total length of the bridge is 120 m.