Kyra Panagia also known as Pelagos or Pelagonisi is a very small island in the Sporades chain. The island is situated northeast of Alonnisos and is a property of the Athonite monastery of Megisti Lavra since it was granted by the Byzantine emperor Nikephoros II Phokas in 963 AD. It is mostly covered in low shrubs but there are also some olive trees. In ancient times the island was known as Ephthyros and Polyaigos and was habitable. Remains of a Neolithic settlement that have been discovered show that the island was inhabited since the Neolithic period, in about 6000 BC. Nowadays the island is uninhabited and only a few people who rent land from the monastery to graze their goats, live sporadically there. Kyra Panagia is in Zone B of the Alonnisos Marine Park and is one of the places where the Mediterranean seal monachus moanchus lives safely. The nearest islands are Gioura to the northeast and Alonnisos to the southwest.

Built on a small hill on the eastern coast of the island, the monastery of Kyra Panagia is inhabited by a single monk. The monastery was built in 1100 AD and restored in 2007. It is a typical sample of an autonomous, post-Byzantine monastery which still provides the Monastery of Great Lavra with meat, oil and honey. The name of the island derives from this historic monastery which looks like a fortress and offers magnificent views all around. On clear days you can see the neighboring island of Gioura, the islets Pappous and Grammeza, even the island of Piperi far on the horizon.

Kyra Panagia has two very safe natural bays. The bay of Planitis in the northeast is one of the largest natural harbors in the Mediterranean. Many sailing boats anchor here offering the chance to those on board to enjoy the unspoiled nature and the clear blue sea of the Aegean. This bay faces northeast and is protected from all winds. The other bay is Agios Petros in the southwest and is affected only by western and southwestern winds. The Byzantines used to anchor their boats in this bay, even today one of them still rests in the bottom of the sea. Within this bay there are smaller bays that end to beautiful pebbled beaches. You can reach Kyra Panagia by excursion boats that leave from the island of Alonnisos. 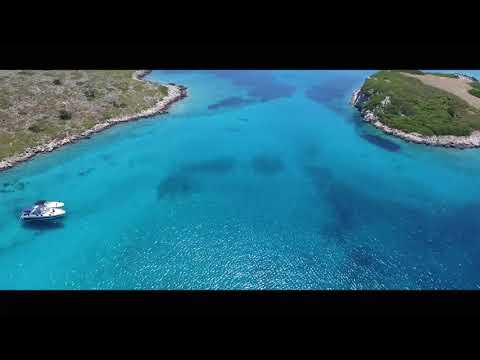